Expanding the arts in the Foothills 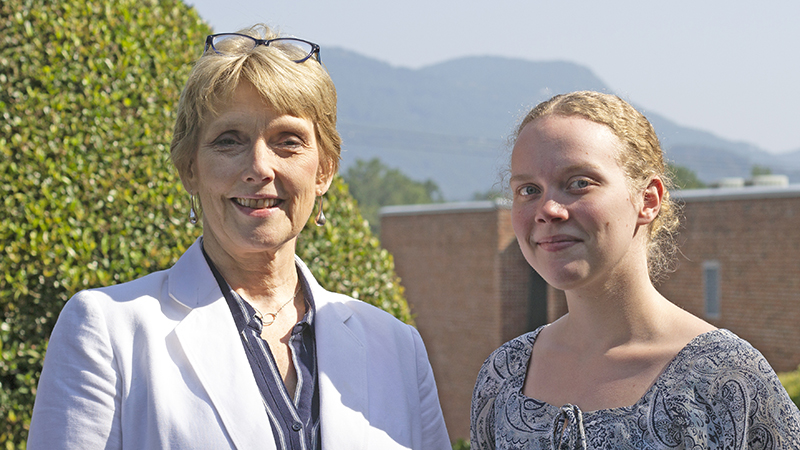 Tryon Fine Arts Center Executive Director Marianne Carruth (left) and Assistant Director of Communications Michelle Fleming stand outside the center’s Farwell Garden Thursday morning, with a view of Tryon Peak in the distance. The view will be something guests may look forward to seeing in the near future, as TFAC leaders are looking to build a new mountain-facing addition to the facility through its $2.7 million capital campaign, which was revealed to the public this week. (Photo by Ted Yoakum/Tryon Daily Bulletin)

TRYON — After working behind the curtains for nearly two years, leaders with the Tryon Fine Arts Center are ready to debut their plans for the future of the local hub of the humanities.

TFAC announced to the public this week its “Expanding Our View of the Arts in the Foothills” capital campaign, which is designed to raise money for a series of renovations and additions to the center’s campus, located at 34 Melrose Ave., Tryon. The institution has quietly raised money for the $1.5 million first phase of the project — which includes the construction of an addition to the current structure — since fall 2016, and is now 75 percent of the way to its goal. 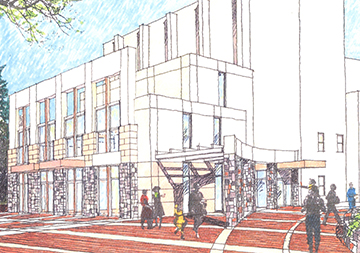 A drawing of the proposed addition. (Submitted artwork)

To help put funding for the first phase “Over the Top,” the fine arts center is offering a series of concerts, shows, art exhibitions and more, which will take place Tuesday through Saturday, Sept. 4-8. Among the events lined up for that week include performances by the Blue Ridge String Quartet, students with the Pacolet Junior Appalachian Musicians and Tryon Summer Youth Theater programs, and choir members from half a dozen local churches.

“[The line-up] really speaks to the variety of the arts in the area,” said Michelle Fleming, TFAC’s assistant director of communications. “We wanted to have a little something for everybody.” 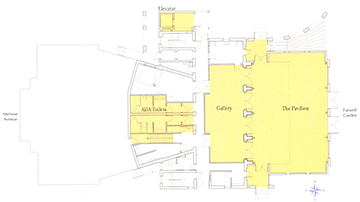 A floor plan of the two-story structure. (Submitted artwork)

Ticket sales for the events will go toward the capital campaign. Thanks to a recent gift from an anonymous donor, all dollars raised during Over the Top week will be matched, up to $25,000.

TFAC leaders launched the capital campaign in fall 2016, with Tim Brannon, the former president of the board, chairing the committee for the fundraising effort. The fine arts center is seeking $2.7 million in donations for the proposed improvements, which are intended to address longstanding accessibility, efficiency and other needs for the facility, which opened to the public in 1969.

Originally opened to provide gallery, performance and office space for various fine arts groups throughout the Tryon area, TFAC made the transition around 10 years into a venue for the performing arts, which in turn has placed new demands on the existing space. This issue is compounded by the growing number of people who attend shows, galleries and classes at the facility, with audiences nearly doubling since 2012.

“We just need a little more space to do the great work we are already doing, in rather cramped quarters,” said Tara Brannon, the current president of the TFAC board of directors.

In addition, the improvements outlined in the capital campaign — including building a new elevator to help guests and performers with mobility problems get from floor to floor — will help make the facility even more accessible to people with disabilities. Renovations to the currently facility will also consolidate office space for staff onto a single floor, along with other improvements.

The main portion of phase one includes the construction of a two-story flexible space pavilion, designed by local architect John Walters, which — true to the name of the campaign — will face Tryon Peak, giving visitors a breathtaking view of the mountains, Tara said.

The new pavilion area will allow the center to host small plays, intimate concerts, lectures and other shows, with room to seat 100 guests. The addition will also include a new storage room behind the TFAC main stage, which will help employees set up and take down sets and equipment more easily.

TFAC plans to begin construction on the first phase of improvements in the first quarter of 2019, with dates for other phases still to be determined. The board has pledged to not break ground on any construction projects until they have been completely funded through the capital campaign, Tara said.

Launching the public portion of the fundraiser through Over the Top week was an important step of the campaign, as it spreads awareness of the project to the community and gives smaller donors a chance to chip in. The idea of allowing the general public to invest in the future of TFAC is true to the center’s founding, as it was a $25,000 gift from the estate of Violet Erskine Parish-Watson — the same total as the recent anonymous donation — along with matching funds from the community that helped create the facility more than 50 years ago.

“We may be in the fine arts, but we’re a grassroots organization, and we like it that way,” Tara said. “We believe the arts are for everyone, and belong to everyone.”