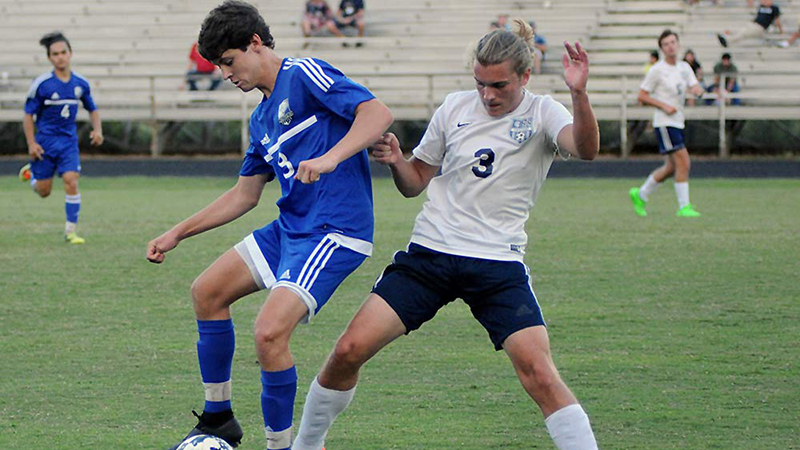 From Clark Phipps’ point of view Tuesday, Polk County’s formula for success was a simple one.

On target early and often, the Wolverines pushed to a 4-0 halftime lead and went on to post a 6-1 victory over Chase in a nonconference boys soccer match in G.M. Tennant Stadium.

Isaac Edwards and Sean Hudson each scored two goals and Jonah Wyatt had 14 saves as Polk County (1-3) picked up its first win of the season. The Wolverines controlled play from the outset and were able to take advantage of several strong runs with excellent crosses to set up goals at the back-side post.

“We’ve been doing a lot of crossing drills and that really helped us finish,” Hudson said. “Coach [Josh] Trejo has been having us run hills for our energy and physicality, and those really helped a lot.”

Polk just missed an early goal when Alex Pearson’s rocket from near the top of the box bounced off the crossbar. But the Wolverines would not wait long for a score, with Edwards feeding a beautiful pass from the right wing to Matias Akers on the left side, where Akers drilled a shot just inside the left post to give the Wolverines a 1-0 lead with 28:15 left in the first half.

Edwards followed a few minutes later with his first goal of the evening, pouncing on a loose ball in the box and finding the back of the net, then added his second tally in the 24th minute, taking a pass from Jack Tinkler, working through Chase defenders and then beating goalkeeper Dannie Deaton to put Polk up 3-0.

The Wolverines got another score in the 30th minute when a deflected corner kick found its way to Hudson high in the penalty area, and the Polk junior blasted a shot into the left side of the net for a 4-0 advantage.

Tinkler scored on a breakaway late in the second half and Hudson closed the scoring in the 67th minute after Grayson Jones pushed deep into the right corner and sent a perfect cross to Hudson at the back post for an easy tap-in.

“I enjoyed it. We still didn’t play to our full potential, but it was a solid effort all night,” Trejo said. “We finished the whole game. We didn’t have one half where we played well and a second half where we don’t show up.

“Our finishing was on point today, which was key. Overall, I’m satisfied with our performance.”

Polk County will travel to A.C. Reynolds on Thursday, looking to keep its momentum against a tough nonconference schedule.

“It feels really good to get our first win,” Edwards said. “I thought we had very solid defense and we put our goals away, plus the midfielders worked well together.”