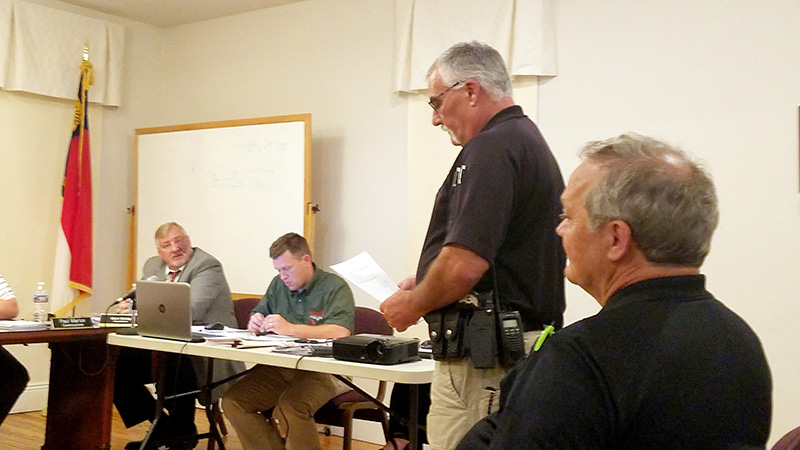 Saluda Police Sgt. John Rickman spoke with city commissioners Monday about bettering the police force, speaking of plans to spend more time at the school and updating business contacts. The police department and commissioners have scheduled a workshop to discuss plans to better the department for 5:30 p.m., Friday, Aug. 24, at the Saluda Library. (Photo by Leah Justice/Tryon Daily Bulletin)

Department to meet with commissioners, residents for suggestions

SALUDA — The Saluda Police Department has set up a workshop to discuss the agency with the mayor and commissioners.

The Saluda Board of Commissioners met Monday and heard from Police Chief Charles Conner and Sgt. John Rickman.

Rickman, who was recently sworn in as a sergeant, said the department would like to come up with a plan to spend more time at the school, and is also reworking its business contacts because they have changed.

“We’re going to try to set up meetings with citizens to get their input and complaints,” Rickman said.

Those meetings will also include business owners to tell the department what they like about what officers are doing and what they do not like, Rickman said.

He said officers would like to speak with the mayor and commissioners to get their input on what they have seen and heard, which will be helpful for the department to make changes.

“We’d like to make up some kind of group with commissioners, the town manager, business owners and people from the community.”

The group would be established to have someone outside of the police department for people to file a grievance if they have one or to give a pat on the back, Rickman said. He said it would be better to have an independent group, in case people do not want to make a complaint directly to the police department.

Commissioners also congratulated Rickman on Monday for his role as sergeant.