Reining: A legacy of the old West 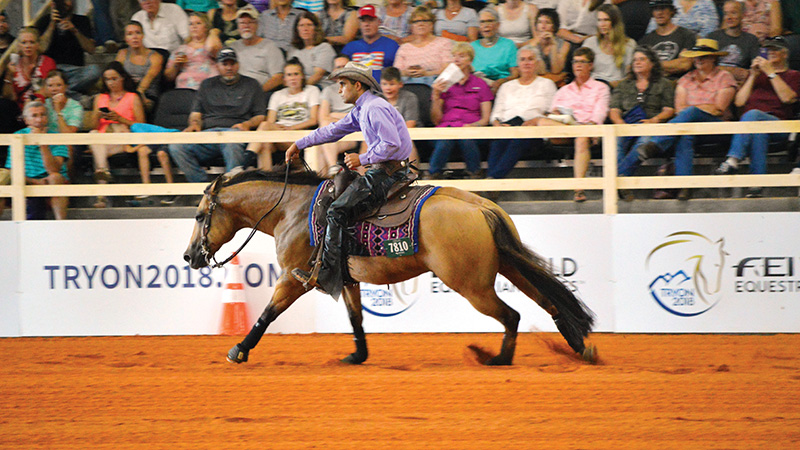 Reining patterns are performed either at a lope or gallop, depending on the movement being executed.

The crowd holds its breath as a golden horse with a flowing white mane races into the arena and slides to a halt.

The horse backs up several steps, then jumps back into a full gallop.

The crowd whoops, whistles and stomps its feet. Cries of, “Ride ‘em cowboy!” echo against the rafters

Though it is a newcomer to the international equestrian scene and the World Equestrian Games, reining brings in a whole new element of fans to what was typically a traditional venue with a decidedly European flavor.

The whoops and cheers, the cowboy hats, the fringed chaps and the twang of Texas drawls sweeps the spectators away to the old West.

As the crowd breathes in the dust stirred by flying hooves, they see sunsets over the mesas in the flash of a golden mane. They hear the mournful howl of a wolf in the distance and hear the notes of a campfire guitar in the subtle rattle of spurs.

Reining found its beginnings in America — and what is more American than a cowboy and his faithful horse?

Reining originated from the quick, nimble movements required of cow horses working cattle on the open ranges of the old West.

With no fences or barns to control the stock, cowboys needed horses to herd, rope, brand, hold for medication and otherwise care for the cattle. The cow horses had to be able to reach a full gallop in a single jump, stop suddenly, spin 180 degrees and take off in another direction as they pursued an errant calf that did not wish to be corralled.

Reining patterns are designed to mimic the efforts of a working cow horse. The horses must be quiet, responsive and cooperative.

Because the cowboys’ hands were usually busy with their lariats, they used their legs and weight more than reins to communicate with their mounts.

Today’s reining competitions reflect that speed, agility and communication. Similar to a good dressage ride, the riders’ aids should not be apparent, and the horse should respond willingly and easily.

Reining patterns consist of eight to 12 movements designed to test the horse’s speed, agility and cooperation with the rider. They are judged on smoothness, precision, fineness, rhythm, degree of difficulty and the communication between horse and rider.

Most of the movements are executed at the lope (slow canter) interspersed with galloping for some movements. Speed is considered to add to the degree of difficulty.

Circles: The horse is required to gallop a circle, then quickly come down to a lope for a second circle in the same direction. After the second circle the horse must change directions, creating a figure-eight pattern with the circles.

In the center of the circle, the horse does a flying lead change.

In the gallop circles, riders are given points for speed, which is considered to make the movement more difficult. The horse is also judged by how quietly and easily he changes from a fast gallop to a slow lope.

Flying lead change: When loping or galloping, a horse places more weight on the inside front and back legs as they strike the ground than on the outside legs. This specific distribution of weight in the canter is called a canter lead, and helps the horse to balance when negotiating a turn.

In reining, the horse is required to switch canter leads when changing direction, using the correct lead for the direction of the turn. The flying change must be quick and smooth, and done in only one stride. The horse must not cross canter (only changing lead in the front leg).

The rundown mimics this skill in a good cow horse. In a reining competition, the horse gallops along the side of the arena for at least 20 feet, then slides to a stop. The rundown is immediately followed by a rollback.

Rollback: After coming to a sliding stop, from a gallop, the horse immediately spins 180 degrees and leaps into a gallop in the opposite direction. The horse should spin on its hindquarters and should not hesitate or stop at any time during the movement.

Back (Backup): When a cowboy ropes a calf or steer, the horse must immediately stop, causing the calf to fall to the ground. Then as the cowboy jumps off to tie the calf, the horse must at times backup to keep the rope tight. This prevents the calf from regaining its feet and risk tangling the cowboy or the horse in the rope.

In reining, the horse is required to back for at least 10 feet in a straight line. The horse must stop when signaled and hesitate a moment before performing the next movement.

Spins (Pivots): There is no direct correlation between the 360-degree spins in a reining pattern and the skills necessary for working cattle. However the spins thrill the crowds and show off the horse’s agility and cooperation.

The horse is required to spin 360 degrees or more, but no more than four and a half full turns. Similar to dressage pirouettes, the horse actually pivots on the hindquarters, leaving one hind foot in place as it pivots around. Reining patterns require at least one set of spins in each direction and, the faster the horse spins, the higher the score.

Pause (Hesitate): Cow horses must not only be very fast and quick to work cattle, they must also be very calm and quiet in order not to spook the herd.

A good cow horse can lower its head and quietly slip into the center of the herd to cut out a particular calf or steer without causing the cattle to mill about too much or worse, stampede.

The pause or hesitate portion of the reining pattern usually follows the spins. It not only gives the horse a chance to recover if it is a bit dizzy, but reflects the horse’s ability to remain calm even after performing a difficult maneuver at speed.

Though pauses are not judged as a separate movement, a horse that does not stand quietly will be penalized.

Reining horses can be any breed, but the Quarter Horse is specifically bred for this type of work.

The well-known saying, “A Quarter Horse can turn on a dime and give you a nickel in change,” reflects the quarter horse’s agility and speed. This speed and ability to reach top speed in nearly a single jump makes Quarter Horses the fastest horses alive over a quarter of a mile.

Though the breed gained fame as a Western cow horse, the Quarter Horse was actually developed by Virginia colonists in the 1700s. In the wooded Virginia countryside of Colonial America, it was simply easier to carve out a short racecourse than it was to build the longer courses designed for Thoroughbred racehorses.

Enterprising breeders began crossing Thoroughbreds with the early Spanish horses (a cross between drafts and Arabians) that had been brought to the new world in the 1600s. This created a small, tough, but very fast horse that could win over the new shorter distances.

If one looks closely, they can still see the large shoulders and thick crest of the Spanish horses in today’s modern Quarter Horse. Other conformation characteristics of the Quarter Horse include large, round, well-muscular hindquarters, powerful shoulders and a low set tail. Their heads are thick and broad, especially through the jowls, and their ears are often small and delicate, reflecting their Arabian ancestors.

Their strong hindquarters support the sliding stops and rollbacks required of reining horses. The Quarter Horses’ Spanish draft ancestry bequeathed them with lots of “bone,” meaning their legs are strong enough to withstand the stress created by reining patterns.

Standing between 14 and 15.2 hands, Quarter Horses are typically small, but very strong, and can weigh as much as 1,500 or 1,600 pounds. Their abundance of muscle allows them to easily carry riders that would be too large for other breeds their size.

Quarter Horses are ideal for reining because, although they are very fast, they are also a calm, sensible horse, capable of handling the fast speeds and quick changes in a reining pattern.

Reining allows for more color than most other FEI sports, and is often reflected in the colored saddle blankets that sometimes match the rider’s shirt or hat.

The horse’s tack includes Western-stock saddles (other WEG disciplines are ridden in English saddles) and Western-style bridles. Riders can wear spurs but are not allowed to carry a whip.

To protect their legs from stress, the horses wear splint boots and polo wraps. The horse usually has skid boots on its hind ankles to protect its fetlock joints from friction in the sliding stop.

Many reining horses will also wear bell boots which are circular boots that fits just above and down over the hooves to protect the horse’s heels and coronary bands (where the hoof meets the leg). Reining horses are also fitted with special horseshoes on their hind feet that slide more easily, help keep the horse straight and prevent the toes from digging into the dirt.

In 1949, the American Quarter Horse Association became the first organization to recognize reining as an equestrian sport. In 1966, the National Reining Horse Association developed the competition’s standardized rules and patterns that opened the door for worldwide participation.

It was not until the year 2000 that the Fédération Equestre Internationale (the governing body for WEG) recognized the growing popularity of the sport and began sanctioning international events. Two years later, reining thrilled crowds at the WEG event held in Jerez de la Frontera, Spain. •