The Tryon Concert Association will open the 2018-2019 season with the quintet Canadian Brass on Thursday, Oct. 4, at the Tryon Fine Arts Center.

Called by The Washington Post “one of the most popular brass ensembles in the world,” this group has performed across the globe. Many awards have come the quintet’s way, including the Grammy, Canadian Juno and German Echo recording awards. The members have recorded with such major orchestras as the Berlin Philharmonic, the New York Philharmonic and the Boston Symphony. 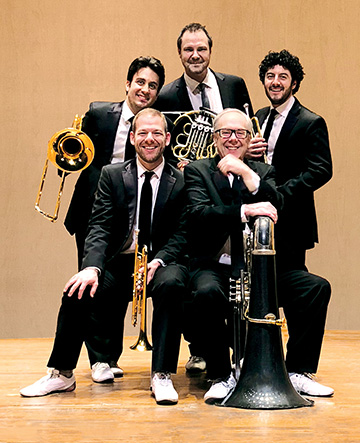 Over the past nearly-50 years, Canadian Brass has appeared on major North American TV programs such as the “Johnny Carson Show” and “CBS Sunday Morning,” and also on Hunan TV in China. The members were the first Western musicians allowed into China after the Cultural Revolution had suppressed Western art and music.

Formed in 1970, the group’s early recordings were on LP labels. In recent times, Canadian Brass has recorded more than 130 CDs and DVDs.

The members provide educational outreach under the banners “Effortless Performance” and “Shape your Musical Destiny,” helping young musicians navigate the world of self-production and promotion.