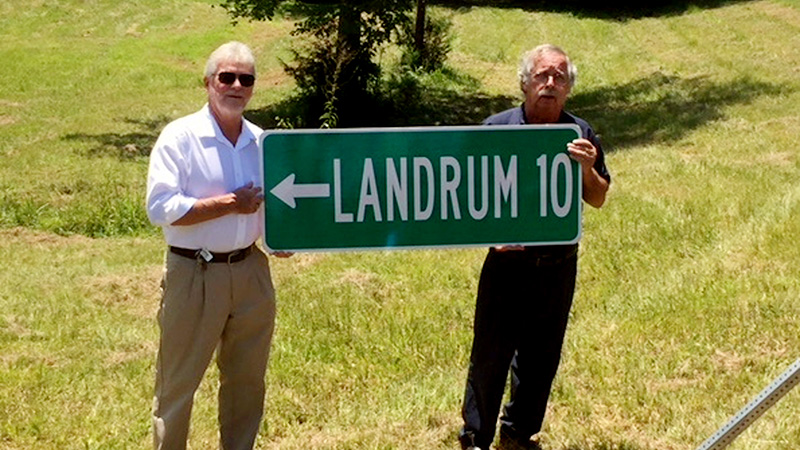 Landrum Mayor Robert Briggs (left) and Gene Russell, of Russell Diesel Service, oversee the installation of a sign on the corner of John Shehan and Moore roads. (Photo submitted by city of Landrum)

LANDRUM — A few months ago, Landrum Mayor Robert Briggs received a call from a man in Mill Spring asking for a sign.

“The request came from Gene Russell. He asked us to put up a sign,” Briggs said. “Apparently people coming from the equestrian center would stop by frequently asking how to get to Landrum.”

Gene Russell is the owner of Russell Diesel Service located on John Shehan Road, not far from the Tryon International Equestrian Center. He provides diesel service and horse trailer repair for 10 surrounding counties and said many of his customers participate in events at TIEC.

Russell said the problem was people constantly turning around in his shop driveways and heading back to Moore Road.

“They turn around in my two shop driveways, go back and to the intersection to Landrum and take Moore Road,” he said. “This happens constantly, especially on the weekends.”

Russell said the folks are looking for Landrum to go and have dinner.

“It’s been really annoying for the past three or four years,” he said.

When Russell spoke to Briggs, he and Landrum City Administrator Rich Caplan visited Russell, toured his shop and talked about a solution to the problem. Landrum Streets and Parks Supervisor Marion “Peanut” Price installed the sign on the corner of John Shehan and Moore roads last week.

“This saves Mr. Russell some interruption, provides an important service to TIEC visitors and serves as an excellent marketing opportunity for Landrum,” Caplan said.