Last event before WEG is all about kids, ponies and fun 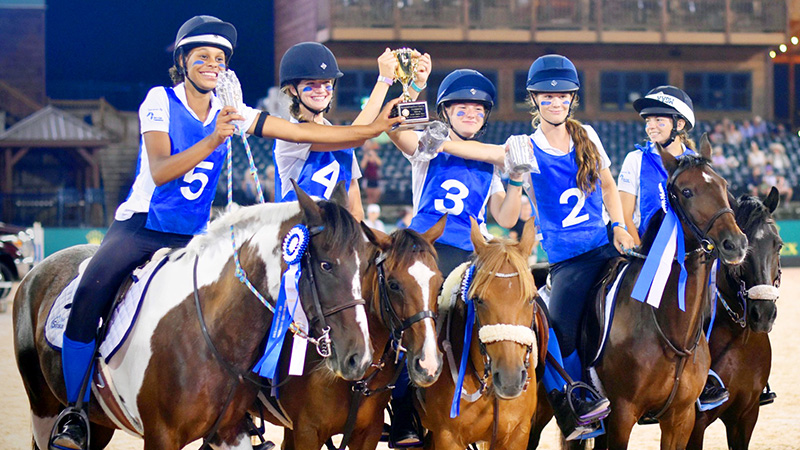 MILL SPRING — Last Saturday night was especially fun at the Tryon International Equestrian Center, with ponies from all over the U.S. racing around the George Morris arena. 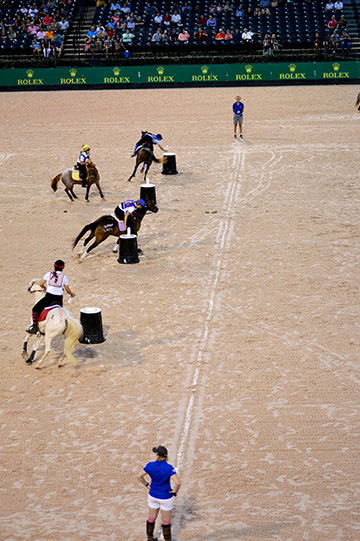 Pony Clubbers race to place plastic cups atop barrels in one of the mounted games during the President’s Cup Pony Club Games Competition at TIEC. (Photo by Catherine Hunter/Tryon Daily Bulletin)

The games competition was the highlight of the weeklong U.S. Pony Club Charles Owens Championships East competition, which featured not only the games, but rally competitions including eventing, dressage, show jumping, Polocrosse, stable competition and a quiz. In addition to the Eastern Championships, competitors from Great Britain, Ireland Australia, Canada and across the U.S. gathered at TIEC for the Pony Club International Tetrathlon Exchange.

“It’s fun to ride in such a huge arena, and my pony, Churro, is absolutely perfect, so she takes good care of me. This is my first time at Champs,” said Azaria Smallwood, a member of the winning team.

Mounted games in Pony Club was originally the idea of His Royal Highness Prince Philip. Philip thought it would be a fun way to encourage enthusiasm, participation and training in young riders without the need for expensive show ponies.

Members of the wining team for the President’s Cup Pony Club Games Competition hand off the baton in the relay race during the Saturday night competition at TIEC. (Photo by Catherine Hunter/Tryon Daily Bulletin)

Mounted on medium to large size ponies (12 to 14.2 hands), the youngsters race across the arena and lean down from their saddles to scoop objects from the ground. Many accomplish this as their pony gallops through the turn and races back to the finish line.

In the Pony Club competitions, competitors are encouraged to work as a team supporting each other. Adults are not allowed in the barns, and the Pony Clubbers work together to set up their stalls and the team’s tack room.

They are judged not only on the games races, but also on their stable management.

Horses and tack are turned out with military polish and competitors are extremely conscientious about caring for their mounts.

The Pony Club Championships East July 25-29 was the last event held at TIEC before the World Equestrian Games begins in September. TIEC Director of Equestrian Operations Molly Oakman said it was wonderful to have the Pony Clubbers at TIEC.

“It helps us remember what this is all about,” Oakman said. “It’s so great to see these kids working so hard and having so much fun.”

Fun for the whole family