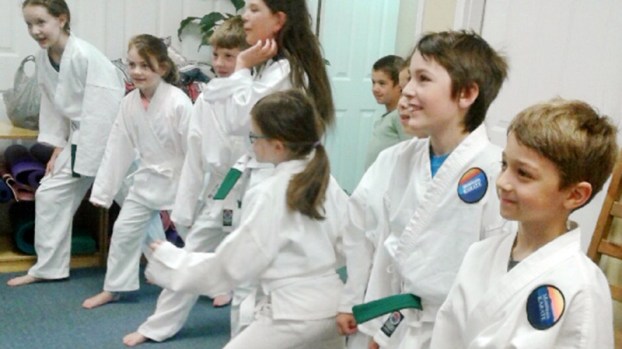 Many of the Mountain Karate students from the Saturday morning children’s class will be attending a family self-defense workshop on Aug. 25. (Submitted photo)

What should parents tell their children about self-defense? What is the best way for a woman to effectively defend herself against an attacker?

Sensei Jeff Brooks, of Mountain Karate, said it is not so much about the physical technique as it is about being alert to one’s surroundings and being aware of what to look for. If something dangerous happens, the moment of crisis is way past the time a person needs to be thinking about self-defense, he said.

“Physical techniques are a last resort, and they’re not a good resort,” Brooks said.

Brooks is offering a family self-defense workshop at the Saluda Senior Center on Saturday, Aug. 25. The workshop will help people recognize what to be on the lookout for, to understand the significance of these things and learn what they can do about it.

“The premise of the seminar is that random violence is not random,” Brooks said.

Brooks served as a law enforcement officer both in Massachusetts and Hendersonville, where his wife, Tarleton, is from. As a detective, he has investigated hundreds of crimes, and said it was different from what people might think.

“I’m hoping my experience might be useful to people,” Brooks said. “When people know what to look for, there is a lot they can do to keep themselves, their homes and their families safe. People have a lot of control over their own safety, both at home and away from home.”

The seminar will include the physical techniques for those who wish to participate, but those who do not will still gain a great deal from the workshop, such as learning how to avoid giving off vulnerable cues. Instructors will also discuss information on how to spot a predator or a threat.

“We want to get out in front of the predator and recognize danger before we encounter it,” Brooks said.

For more than 20 years, Brooks trained both in Okinawa and from Okinawan instructors in the U.S. He is now the owner and instructor for Mountain Karate in Saluda.

Brooks has taught many of these self-defense workshops for churches and businesses, and has always wanted to offer them to the general public.

For more information or to register, people may contact Mountain Karate at mountain-dojo.com or call 828-699-0909.

Giving guests from all over a little taste of Polk County

Fruit stand thriving across from the hustle, bustle of TIEC MILL SPRING — Across from all the hustle and bustle... read more