Giving guests from all over a little taste of Polk County 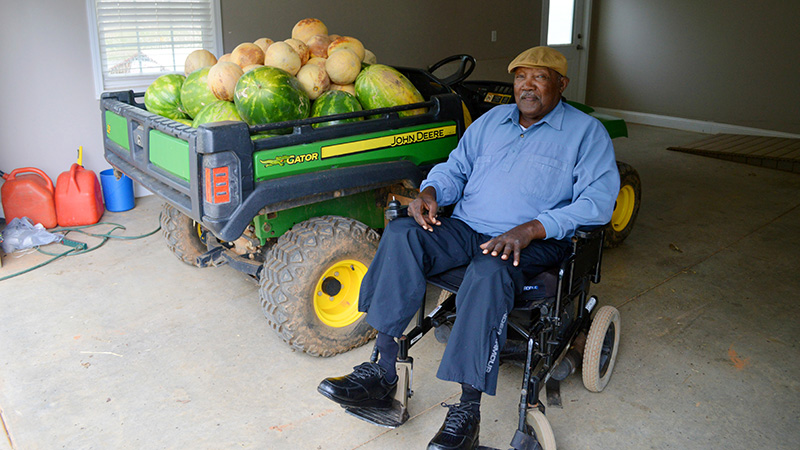 Fruit stand thriving across from the hustle, bustle of TIEC

MILL SPRING — Across from all the hustle and bustle at the Tryon International Equestrian Center, overlooking all the horse trailers and visitors from all over the world, sits a produce stand that shares a little taste of Polk County with customers.

A large umbrella shades a small table stacked with watermelons. A plastic bucket that bears a sign reading, “Self-serve produce, leave money in bucket,” sits next to the stack. 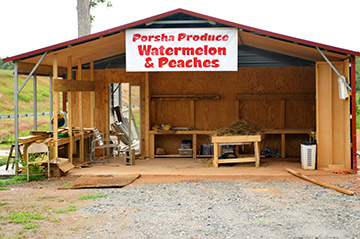 Leroy and Dorothy Staley are building a small produce stand, similar to the one they used to have on John Shehan Road. (Photo by Catherine Hunter/Tryon Daily Bulletin)

“It’s self-service,” said Dorothy Staley, whose husband, Leroy, owns the produce stand. “We’ve never had anyone take anything without paying. They put the money in and go on.”

Leroy has owned a produce stand in the area for more than 12 years. The original stand was located on the hill on John Shehan Road next to the old Red’s Store, near what is now the entrance to TIEC. When construction began on the equestrian center, Leroy moved the stand to his property on the other side of Pea Ridge Road.

The Staleys also own 5 acres at the bottom of the hill on Pea Ridge Road, where Leroy used to grow all kinds of vegetables. He now ships in the produce from local farmers. 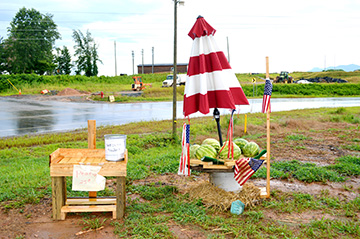 Across from all the hustle and bustle of TIEC, a large umbrella shades a small table stacked with watermelons. Porsha Produce provides watermelons and produce to people from all over the world. (Photo by Catherine Hunter/Tryon Daily Bulletin)

Farming and produce were not his main vocations, though.

“My family are plumbers by trade,” he said. “I do the produce to stay busy, to have something to do after retiring.”

His son, Billy, is a plumber, and is currently working on the construction projects at the equestrian center.

Most of their customers are people who work at TIEC.

The Staleys both said they liked having TIEC across from their house. They enjoy attending the events, and like to go to Roger’s Diner for dinner.

“The equestrian center has been a real blessing for us,” Staley said. “They would help us do what we need and couldn’t do ourselves.”

Dorothy said workers from TIEC came over to help clear trees and clean up the yard from storm damage. When Leroy lost his leg, they came and put firewood on the porch, he said.

“They’ve all been so nice to us,” Dorothy said. “Even to the head man himself, they’ve been so helpful.”

The Staleys are building a 24-foot-by-16-foot store at the bottom of the hill from their house to replace the table and umbrella. The business will also be named Porsha Produce, after their granddaughter.

Right now, the best sellers are big juicy watermelons, cantaloupes and ripe peaches. There is also a bucket of peanuts.

Drivers cannot miss the stand if they take a right out of TIEC and look for the first house on the left. There is a sign that reads, “Watermelons, $5.”