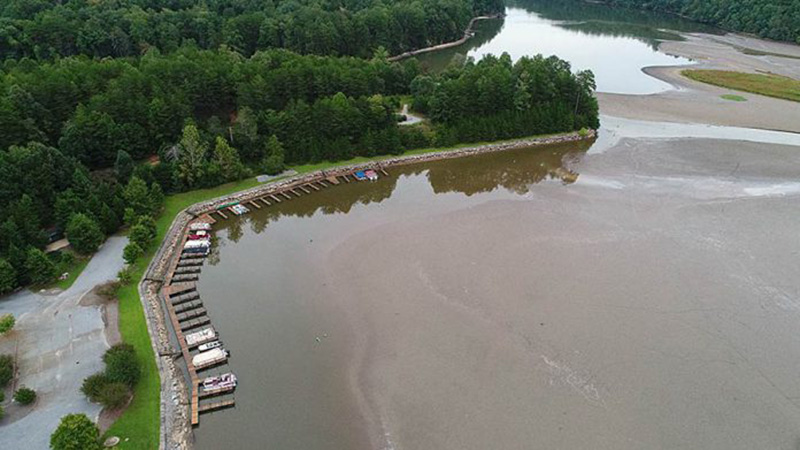 Lake Adger water levels will be dropped up to 5 feet between Aug. 27-31 so the Wildlife Resources Commission can conduct testing in preparation to dredge the marina area. (Submitted photo)

MILL SPRING — Polk County officials are trying to give residents notice that, at the end of August, Lake Adger will be lowered up to 5 feet for testing to dredge the marina.

Polk County Manager Marche Pittman received a call on Wednesday from the WRC informing him that the testing will take place, he said Thursday.

“We wanted to make sure people had plenty of notice,” Pittman said. “People will not be able to get a boat in at the marina during that time. I’m relatively sure [lowering the lake level] will make it impassible. The lake should be back to full pond by the last day.”

The WRC announced in  spring that it would dredge the lake this fall and winter.

The Polk County Board of Commissioners approved the state’s dredging plan in March, which will include dredging the channel and using the cleaned- out material  to create a wetland.

WRC is responsible for maintaining adequate water depths for public access from the boat ramp and marina through an agreement with Polk County. The sedimentation over the years has restricted channel access, making dredging necessary.

The project includes dredging approximately 6,800 cubic yards to maintain a depth of 7 to 8 feet below normal full level.

The in-water placement option WRC plans to use could create an opportunity for habitat enhancement and eliminates the need for staging, dewatering and hauling. The plan also provides a placement option for future dredging events.

The work will begin sometime this fall or winter to minimize the impacts to recreational users of the lake.

WRC officials said in March the intent is not to draw the lake down very far during the dredging, with the commission planning to keep the marina and the channel open for recreation and homeowners.

Lake Adger was created in 1925 with the construction of the Turner Shoals Dam on the Green River.

Polk County purchased the lake and dam in 2009 in order to create a future drinking water source for the county.

An agreement was approved in 2004 between the Lake Adger Property Owner’s Association, Lake Adger Developers, the Polk County Board of Commissioners, Northbrook Carolina Hydro and WRC to provide public access to the lake. WRC then agreed to pay an annual fee and to be responsible for maintaining the access channel from the Lake Adger Marina and Marina Boat Ramp facility to the main body of the lake so watercraft can access the water from the boat ramp.

“Such responsibility will include the obligation to dredge the channel as necessary to maintain access to the waters of Lake Adger for watercraft,” states the agreement.