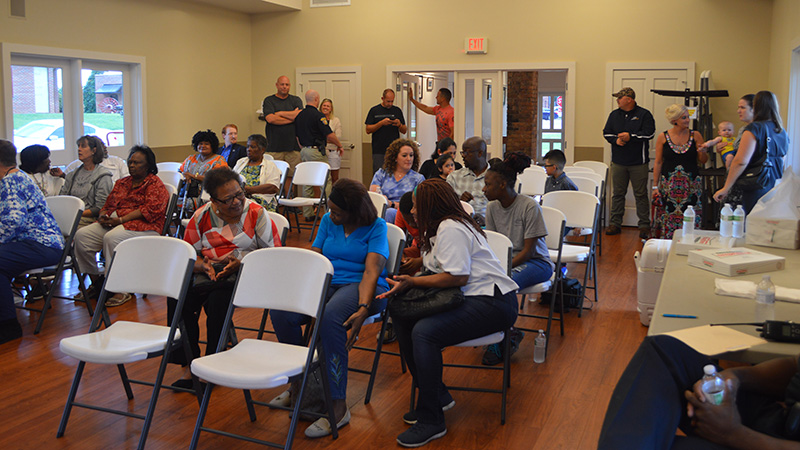 LANDRUM — It was all about kindness, community and helping each other, as residents and officers gathered at the Landrum Depot Tuesday.

“Excuse me while I help set up more chairs,” said Acting Chief Robert Smith. “We’ve had a great turnout.”

“We’re excited about this first meeting. Our goal is to have a meeting every month.” Trimble said. “We want to foster relationships in the community.”

The purpose of the meetings was to create a safe place for people of all faiths the come together in a relationship, Smith said.

“Officer encounters with the public can be difficult,” he said. “We want to put a positive face to the relationship.”

Trimble opened with a prayer, then spoke about kindness, beginning with the definition of the word.

He suggested ideas for types of random, intentional acts of kindness, such as leaving change in the vending machine, buying a child an ice cream cone or picking up litter. He shared stories about the reactions people exhibited when his sons opened doors for them and about sharing his pastry and coffee with a homeless man.

The officers talked about some of the exiting and new programs the police department is working on, such as the “Are you okay?” call program. Underwood mentioned that they wanted to create an impromptu neighborhood watch, which, he explained, means anyone witnessing unusual or concerning activity in their neighborhood could call the police department to come and check on the situation.

“Let us know about what’s going on,” Underwood said.

Smith said the annual Breakfast with the Blue free senior breakfast was scheduled for Aug. 17. People can find more information on the department’s Facebook page, he said.

All four officers wanted very much to reach out to the community and let them know they were there to help and serve.

“We want people to know it’s OK to come and talk to the police,” Smith said.

The police department will announce the date of its next prayer meeting on its Facebook page.