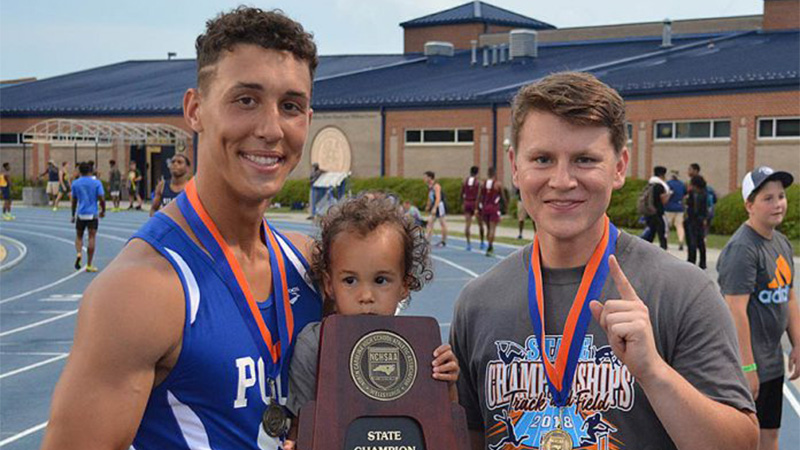 The bag, Simoncic told the team, contained some small four-leaf clovers as well as some larger ones. Each athlete was urged to take one.

The clovers may have brought Polk County athletes some luck. The mindset of grand thinking may have done even more to help the Wolverines deliver arguably the best day in the program’s history.

By late Sunday at North Carolina A&T State University, Polk County’s boys team had its first outdoor state championship, winning the 1A title by six points over John A. Holmes and Albemarle. The Wolverine girls, meanwhile, added a third-place showing.

Junior Jake Justice earned the first outdoor pole vault state title in school history, adding to the indoor crown he won in the event in February, and Polk’s girls 4×400-meter relay team capped the day with a sterling run to win the Wolverines’ first state medal since 2012.

“It was an outstanding day,” said Polk County head coach Alan Peoples. “I think the thing that helped us more than anything was that the kids finally began to believe they could do it.

Justice also delivered a second-place finish in the long jump, but Polk County’s win was truly a team effort. Almost every Wolverine who made the trip scored at least one point, with David Horton adding a third place in the high jump to lead the rest of the effort.

The same held true for the Polk girls.

Seniors Autumn Owen and Reagan Waddell opened the scoring for the Wolverines by finishing second and fourth in the shot put. Lauren Ketwitz took second in the pole vault and Izzy Jackson added a third in the 400-meter run to lead a good day for the Polk squad.

But the good day became great just before a passing storm hit Belk Track. Mariah Overholt, Marissa Twitty, Sydney Waldman and Jackson blazed to one of the fastest times in school history in the 4×400, Jackson pulling away down the stretch to help the team win the race by almost six seconds.

“A 4:05 is probably the second or third fastest time we’ve ever run at Polk County,” Peoples said. “It’s in the top three, for sure. That was wonderful, too.”

Taking all of Polk County’s success in was Peoples, who, for the first time in many years, was not involved in meet administration. The veteran head coach had the pleasure of watching the Wolverines’ success with his son, Seth, a former Polk County standout who is now the head coach at Grimsley High School.

Peoples has been involved in Polk County track since 1985 and has served as the head boys coach since 1989, the only coach in the program’s history. He has produced almost 50 state champions and more than 50 college signees. He has won numerous conference and regional titles.

The state title, though, was his first.

“It was a long-sought goal to win a state championship,” he said. “It’s a nice culmination. Now I need to pick up a girls title. Why not?

“The kids worked hard and they really supported each other. It was just a fantastic day.”