Digging out of the debris 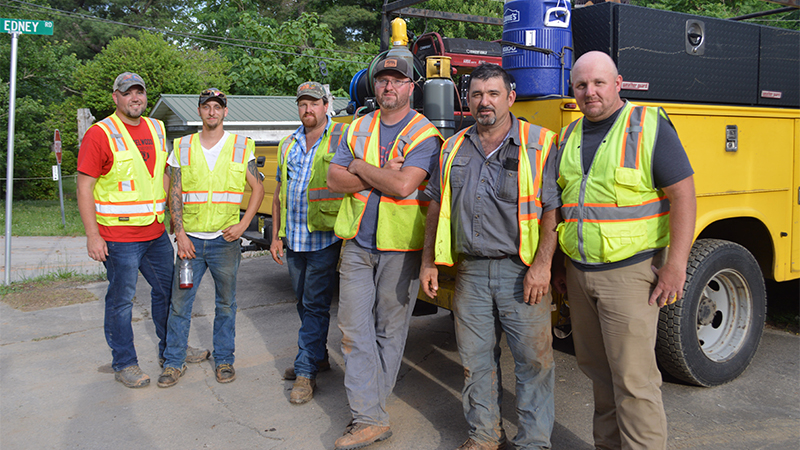 Members of the NCDOT Bridge Maintenance Division 14 came as far away as Haywood and Cherokee counties to help with storm cleanup. (Photo by Catherine Hunter/Tryon Daily Bulletin)

TRYON — The roar of trucks and backhoes echoed up the mountainside.

In the background was the deafening roar of a flooded river, and permeating the air was the acrid stench of rotting vegetation. The scene looked like pictures from news feeds of disasters in California or Puerto Rico — yet it is in the backyard of normally tranquil Foothills.

She and Sandee Wheeler came in from McDowell County to help out the victims of Friday’s mudslide on Highway 176.

Graham Raxter, bridge maintenance engineer for Division 14 of the North Carolina Department of Transportation, came in with others on Saturday to access the damage. Once they knew the extent of the work ahead, DOT crews begin pouring in from as far away as Haywood and Cherokee counties.

They have been pulling 16-plus-hour shifts to try and clear debris away from bridges so the water can flow through rather than flooding over the river banks. Other crews have been working hard to clear enough from the roads that emergency vehicles could get through to help citizens.

“We were able to fix a lot of small areas real quick. We’ve been clearing debris and fixing the washes over the top of pipes,” Raxter said. “We’re trying to clear the culverts and bridges. It’s important to get the debris out of the way in case we have another big rain.” 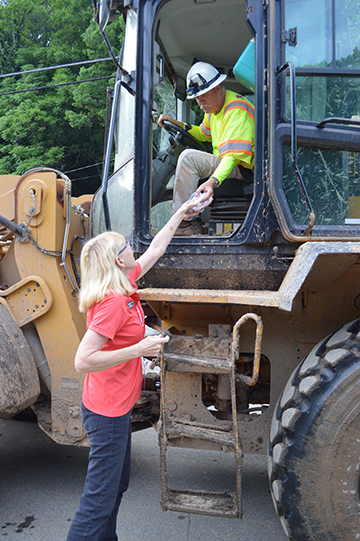 On Monday, they brought in an additional 60 workers to help just the bridge maintenance crew. In addition to the bridge crews, DOT pulled personnel  from the Interstate 26 overpass work in Columbus to help with cleanup in the disaster area. They also have independent contractors, such as GLF Construction working hard to clear the roads.

GLF Superintendent Lenny Hodge was working with a crew on the huge mudslide caused by the old quarry near a vacation home at 3791 U.S. Highway 176. Hodge and his crew worked all Saturday night and Sunday, finally leaving at 11 p.m. Sunday night.

They were at it again early Monday morning, using two backhoes to fill dump trucks full of mud and debris. At times, Hodge would pick up a chain saw to break up the huge trees that had been uprooted and swept down the mountain. By 3 p.m. Monday, they had sent 100 truckloads to the landfill and they continued working until dark at nearly 9 p.m. that night.

Though they would like to be able to place the debris somewhere other than the landfill, getting the proper permits to deal with it in a more environmentally friendly way would take weeks or months, Hodge said. He did say they would use a lot of the rock they cleared away to shore up the road where water had washed out a gaping hole underneath the asphalt of Highway 176.

According to Wheeler, the Red Cross officially declared the area a disaster and quickly responded with meals, water, cleanup supplies and case workers to help the residents. Some people had power by Monday, while others still have no water or power midday Wednesday.

On Saturday, emergency personnel set up a command station at the former Tryon Youth Center owned by Melanie Estrada and her husband, Mitch Webb. As more rain is forecasted for the next few days, Estrada and Webb have been working frantically to dig ditches around the building to prevent more water from flooding the basement.

Other residents are waiting for their wells to clear and the power to come back on so they can get a shower.

In the meantime, everyone is mourning their neighbor, Patricia Case, who lost her life when a mountain of mud swept through her home Friday night.