Crowd wants ‘No Build’ for Highway 108 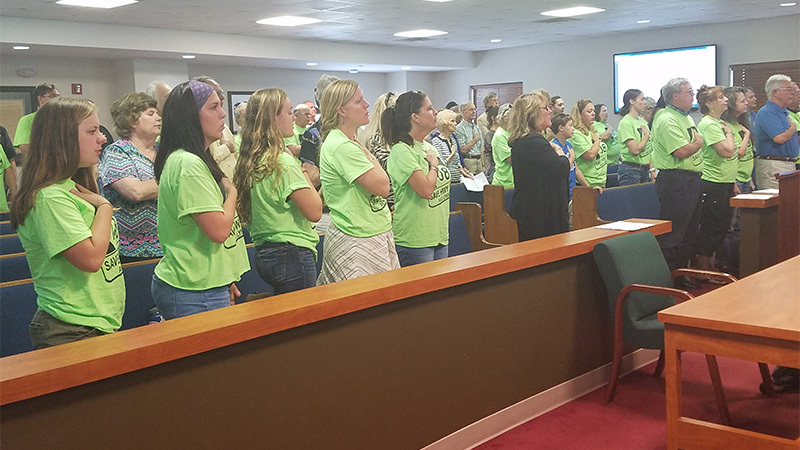 The Polk County Board of Commissioners heard from 18 residents Monday, who were all in favor of the county sending the North Carolina Department of Transportation a “No-Build Alternative” letter for Highway 108 between Columbus and Tryon. More than 2,000 residents have signed a petition against the state’s current $19 million to widen Lynn Road, add 12 turn lanes and replace bridges. Residents have spoken heavily against the plan, mainly because it would take significant property, including the removal of six commercial buildings and four homes. (Photo by Leah Justice/Tryon Daily Bulletin)

COLUMBUS — A large group of residents sent a clear message to Polk County Commissioners Monday that they want the county to sign a “No Build” letter to the state for Highway 108 between Columbus and Tryon.

During citizen comments, commissioners heard from 18 residents, who all spoke in favor of the county sending a letter to the North Carolina Department of Transportation against any widening of the road. The residents had a letter prepared for the county to sign.

Melissa LeRoy, who works at Foothills Wellness Center in Lynn, began by recognizing the tragedy that has fallen on the county, referring to Friday’s flooding, mudslides and landslides where a life was lost.

LeRoy said 2,031 residents have signed a petition against the proposed widening of Lynn Road. and she handed over 100 pages of comments to the clerk for the record.

She said NCDOT alerted residents of a “No Build,” option, which means the state scraps its current plan to widen the road, add 12 turn lanes and replace two bridges, but will still maintain the highway, including paving, make necessary repairs and inspecting and maintaining the bridges.

Commissioner Chair Jake Johnson said the county has sent a letter stating the county’s opposition to the plan in its current form.

Dorothy Easley, who owns a home affected by the plan, said residents are aware of the county’s letter. She said there is a need for a “stronger, more specific letter.”

“It reflects your constituents,” Easley said.

The document states the county has received an outpouring of opposition to the current plan and details what the concerns are, including the irreversible altering of the rural, historic community, removal of properties and concern over statistical data.

“So, if you don’t agree with the plan, please sign the letter,” Easley said.

Foothills Wellness owner Dr. Joe Picone said he does not see the need for the state’s plan.

“I need for somebody to tell me why this road needs to be torn up,” Picone said.

Picone said some will lose property and jobs, and has spoken to people in Tryon and Columbus who are against the plan. There are over 2,000 people who have signed a petition against it.

Melanie Jennings said if the county should take anything from the horrible weekend the area suffered it is that the bridges the state said were so bad “held up beautifully.”

She suggested the state use the $19 million planned for the Highway 108 widening and use it in Polk County on roads that actually need it.

Phillip Pleasants, who owns the Sidney Lanier home in Lynn, said there are a lot of government statistics that are inaccurate. Many have said the state’s vehicle count of more than 9,000 vehicles per day is too high. Pleasants said the project is not needed, and not wanted.

“It’s a waste of taxpayers’ money and it’s extremely detrimental to the beauty of our area,” Pleasants said.

Carl Pleasants said, at 18 years old, he left Polk County, but there is a reason he chose to come back. He said the letter the county previously sent has no teeth and no depth.

In speaking of the NCDOT changing the plan from the previous four-lane plan to the current widening, Carl said he “doesn’t want to eat the sandwich you just scraped the crap off of.”

“We don’t want to eat the sandwich just because you make it sound better,” Carl said.

Nadine Naujoks said she has lived in Polk County since 2003, and grew up in Virginia Beach, which used to have two-lane back roads that are now eight-lane highways. She said she moved to Aspen and was a catering coordinator at a ski club. She said none of the employees who worked in the industry lived in Aspen because they could not afford it.

Commissioners who said they would sign the letter were Myron Yoder, Shane Bradley and Tommy Melton.

Yoder said he was against the four-lane plan, but thought a turn lane here and there would be good, as well as street lamps and a walkway for bikes. He has listened to his constituents, though, and has changed his mind.

Bradley said he would not support anything the state does beyond what is there now.

The item was not on the agenda, so commissioners could not take a vote on a “No-Build” plan Monday.

Wolverines revel in day filled with state track and…