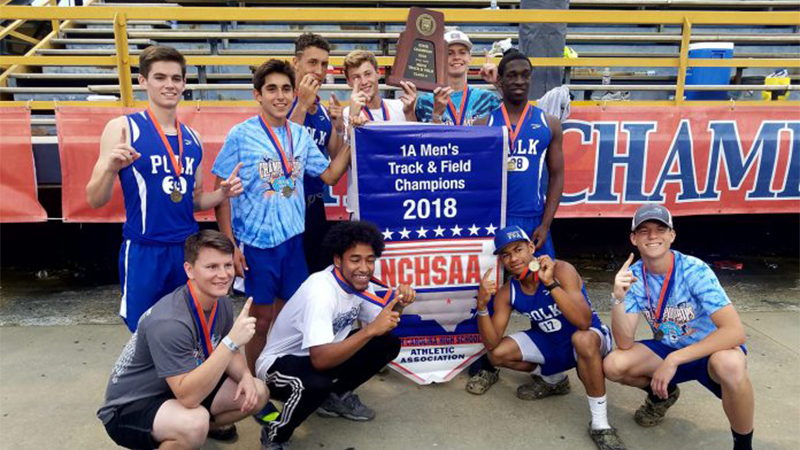 The best 1A boys track and field team in North Carolina resides in Polk County.

The Wolverines earned the first state boys track and field championship in school history Sunday, winning the 1A title in the 2018 state meet at North Carolina A&T State University.

Jake Justice’s victory in the pole vault — the first time a Wolverine has won an outdoor title in that event — led Polk’s effort, but the Wolverines needed every point they could get from every athlete they could get in finishing six points ahead of John A. Holmes High and Albemarle. Polk had 44 points, with Holmes and Albemarle each with 38. 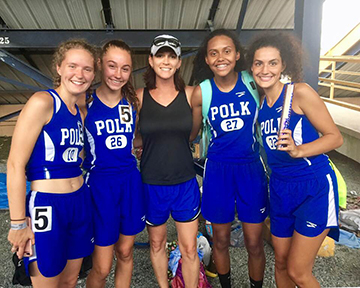 The Polk girls also had a pair of state runners-up in Autumn Owen (shot put) and Lauren Ketwitz (pole vault). Owen set a school record with a throw of 37-10 1/2 to earn her second-place showing. Jackson also placed third in the 400-meter run.

Murphy used that second-place finish in the 4×400 to surge ahead of Research Triangle and win the 1A girls title. The Bulldogs had 60 points, with Research Triangle finishing with 57 and then Polk in third with 37.

Justice becomes the first Wolverine to win an individual title since John Spencer Wolfe did so in 2009, and the first to do so in a field event since Regis Bittle’s victory in the shot put in 2008. Justice also won the state indoor title in the pole vault earlier this year.

The Polk junior matched his personal outdoor best at 14-6 to win the title, needing all of that to defeat Princeton senior Luke Brush, who cleared 14-0.

Of the Wolverines who earned points Sunday, only three — Fox, Wolfe and Wyatt Derkach — are seniors.

Twitty placed 11th in the long jump with a mark of 15-0. East Carteret’s Breah Taylor landed a jump of 18-3 to take the top spot in the competition.

Jackson had a time of 13:13 in the 100-meter dash preliminaries and failed to qualify for the final.

Hobbton’s Josh Polk dominated the two shortest events of the meet, the 100 and 200 meter dash. Polk crossed the line in 10.92 seconds in the 100 and blitzed through the 200 in 21.94 seconds. He was named the meet’s Most Outstanding Performer.

West Montgomery’s Araybian Lilly was the girls’ Most Outstanding Performer, winning three individual events. Lilly claimed the three sprint events with a blazing 12.48 second time in the 100, a 25.73 seconds mark in the 200 and a speedy 57.06 seconds performance in the 400 meters.

PCVC 13U squad completes season with good showing in…