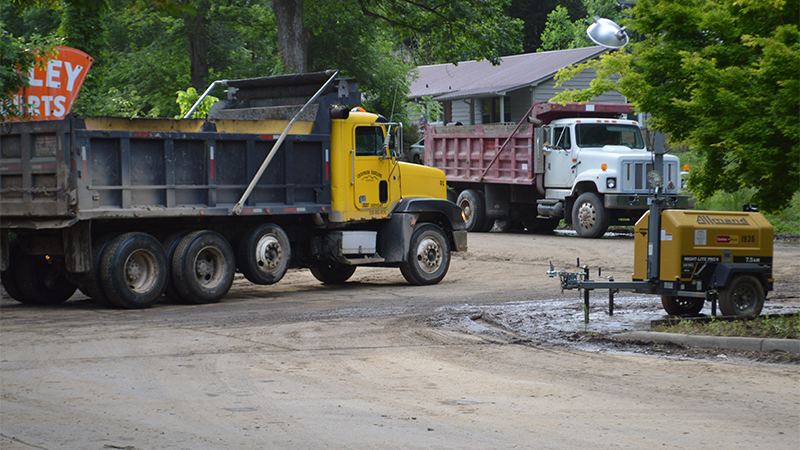 Crews are working around the clock to clean up the damage in the Pacolet Valley following Friday’s flood and mudslides. (Photo by Catherine Hunter/Tryon Daily Bulletin)

TRYON — While crews work round the clock to repair damages, Polk County officials have identified 40 homes so far that were damaged by Friday’s flood and mudslides, which the state estimates will cost more than $1 million to clean up in the Tryon valley alone.

The Polk County Board of Commissioners met Monday and heard from Emergency Management Director and Fire Marshal Bobby Arledge. Arledge said on Friday night, when all the rain came through, the county declared a state of emergency.

The North Carolina Forest Service flew over the area for an assessment Monday, with Arledge saying the assessment revealed nine different mudslides on Warrior Mountain, above the Pacolet Valley (U.S. 176, Tryon).

“The mudslides were all the way to the top,” Arledge said. “From top to bottom.”

Initially, there were 20 structures damaged. Arledge said on Monday the county found 13 more, bringing the total to 40 structures.

He said some were moderately harmed, while others were majorly damaged.

“One house you would not believe,” Arledge said. “It had 8 feet of mud in it.”

As of 6 p.m. Monday, the North Carolina Department of Transportation had hauled 3,800 tons of debris to the county transfer station, Arledge said. The department is working 24 hours a day to get the cleanup complete as quickly as possible.

“That will probably be double that [amount] tomorrow,” he said.

The American Red Cross also has teams on U.S. 176 and at Harmon Field. There were seven crews on Monday who went door to door checking on residents, including building inspectors from Polk and Henderson counties looking at structural supports. Arledge said crews still need to assess damage in other areas of the county.

The support within and outside the county has been amazing, the emergency management director said. Arledge said Polk has had crews from as far as Haywood County come to help, and people have brought food and water and offered equipment, such as tractors.

“We’ve had an outpour of support from not only the community, but all different counties helping us out during all this,” Arledge said.

Commissioner Tommy Melton said there are no words to thank Arledge, county manager Marche Pittman, EMS and other departments who have worked on this emergency. Commissioner Ray Gasperson said he saw crews from Haywood County working Saturday.

“I saw you at 3 or 4 in the afternoon, and you hadn’t been to bed,” Gasperson told Arledge. “And to hear how many of our county employees came in on their own time. It’s just incredible. It makes you realize what a phenomenal community we do live in.”

“It’s amazing the people that came to help,” Bradley said.

Pittman said he had a meeting Monday with the NCDOT and they have crews from Henderson, Rutherford and Transylvania counties assisting with the cleanup. He said the NCDOT is speculating they can have U.S. 176 cleaned up in about a week.

Pittman said the state pulled its contractor off the Interstate 26 construction and constantly has trucks going back and forth from the valley to the transfer station.

“And they are doing that 24 hours a day until they get it cleaned,” Pittman said. “They’ve made a big effort.”

The NCDOT sent a release Monday saying the department is assessing damage and clearing roads from the heavy storms over the weekend.

The NCDOT said the first estimate for cleanup of the interstate, highway and secondary road cleanup exceeds $5.5 million, with the early estimate for U.S. 176 exceeding $1 million.

NCDOT officials also said there are other roads in Polk County that need clearing and repairs to pipes, ditches and driveways.

The NCDOT is also cleaning up and making repairs to areas in Transylvania and Henderson counties from the storms.