Fifteen years of bringing art to the mountains 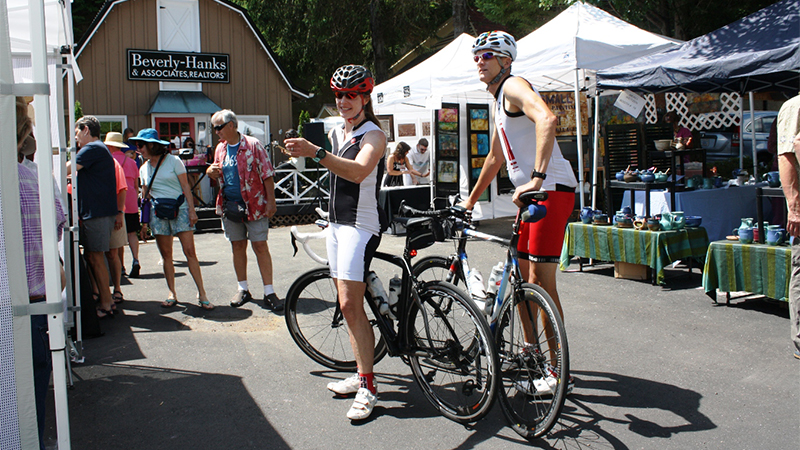 Visitors check out some of the artwork on display during the 2017 Saluda Arts Festival. The 15th annual celebration returns to the mountain community from 10 a.m. to 4 p.m. Saturday. (Photo courtesy of Cathy Jackson)

SALUDA — With its rolling green hills, cascading blue waterfalls and rugged rust-colored railroad running through the city, many describe the scenery in Saluda as picturesque in nature.

Perhaps it is only fitting, then, that the city has served as host to a celebration of the fine arts — in nearly all its forms — for the past 15 years.

On Saturday, the beauty of the mountain community’s landscape will combine with the colorful and imaginative paintings, sculptures, pottery, metalwork and much more that will be on display throughout Main Street during the 15th annual Saluda Arts Festival. The event will take place from 10 a.m. to 4 p.m. that day, and will feature more than 80 artists from throughout western North Carolina, Tennessee and upstate South Carolina, who will be selling and exhibiting their works throughout three blocks downtown. 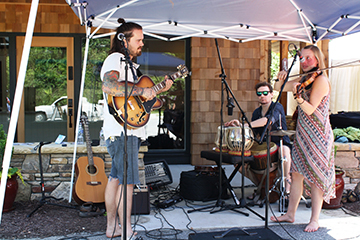 Life Like Water performs during last year’s festival. The group is among several bands who will be performing at this year’s event. (Photo courtesy of Cathy Jackson)

In addition, guests will have a chance to enjoy some live music at Pace Park, the Ella Grace Mintz Stage and the front porch of the Beverly-Hanks & Associates realty office during the day. Bands set to perform on Saturday include Mercury Rising, Life Like Water, Calvin Get Down, Roots and Dore, and the Radio Rangers.

The festival will also feature a children’s tent, where balloon artist Stephanie Miles will create whimsical crafts for visitors. A face painter will also be on hand, and a stilt walker, Ananda (Heather Springsteen), will roam Main Street to amuse younger guests.

There will also be several food trucks present during the festival, and all of Saluda’s restaurants will be open to serve visitors that afternoon.

The Saluda Business Association is once again sponsoring the Saluda Arts Festival, which is organized by a seven-member CORE (Creative, Organized, Responsible, Enthusiastic) team. Among the people helping to put on this year’s festival is Cathy Jackson, who has been involved with the celebration since its foundation in 2003.

In fact, the event was her idea.

Jackson, who was fairly new to Saluda at the time, proposed the SBA organize an artistic festival to replace the association’s annual garden tour fundraiser, which had begun to fizzle out at the time.

“[Saluda has] a lot of artists — it’s like a big art colony,” Jackson recalled thinking. “Why not do an arts festival?”

A total of 18 artists participated in the inaugural event, meeting the organizers’ goal, Jackson said. The festival quickly blossomed over the years, and now welcomes more than 80 exhibitors every year, who draw between 2,500 to 3,000 visitors to Saluda for the event, she said.

“We have artists who have come every year, for the past 15 years,” she said. “They love it here in Saluda…they love the friendliness of the town and the passion of our volunteers.”

Proceeds from the festival go toward different improvement projects in the city. Last year, for instance, the SBA donated $7,000 to the city for the construction of restrooms at Pace Park, Jackson said.

In addition to the CORE team, around 50 people volunteer their time to help during the Saluda Arts Festival every year, driven by nothing more than the desire to do a great job and continue the event’s legacy of success, Jackson said.

“It has a great impact on our economy,” she said. “The SBA sees this as a kick off to spring for our businesses. After a slow winter, this recharges them and earns them a lot of money. All our shops and restaurants will be packed.”

For more information about the event, people may visit saluda.com/saluda-arts-festival.

“Come have some fun, spend some money and enjoy a day in Saluda,” Jackson said.

Click here for a full map of the event.

On her majesty’s orders