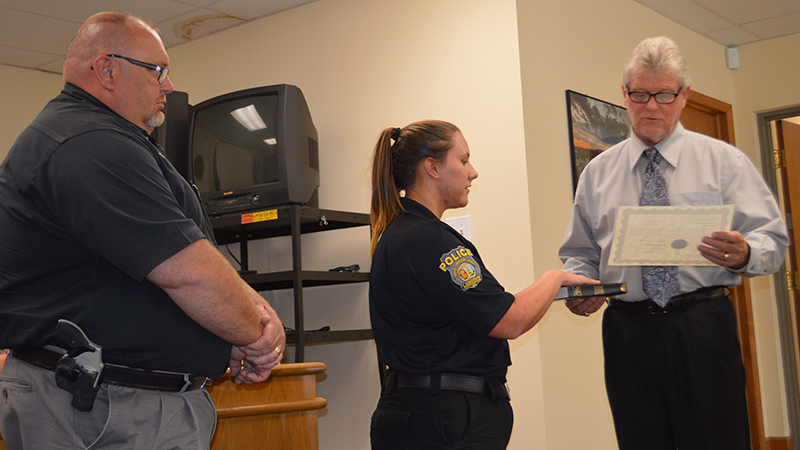 Council member Jon Mathis praised City Administrator Rich Caplan for his handling of the town’s funds. Briggs echoed Matheis’ praise, saying Caplan not only keeps the town within the budget, he gets a lot done at the same time.

“I wish we had more money for roads,” Caplan said, adding that it was a state issue. “Rita [Bruce] and Molly [Morris] do a good job treating people well and collecting funds.”

During the work session before the meeting, the council discussed the possibility of increasing fees for the depot rental, and for reserving Brookwood Park to non-Landrum residents.

“Brookwood Park is getting used a lot by people from Campobello, Inman and Tryon,” Bruce said, who pointed out the cost was currently only $15 per hour.

Morris mentioned that the city was also now covering the cost of propane to keep the pipes from freezing. Matheis suggested the council research the rental fees for similar facilities in surrounding towns, and adjust Landrum’s fees to be more in line, but still competitive.

During the work session, the council also discussed the increasing cost of brush removal and the possibility of adding fees to cover that cost. They also talked about improving the grassy areas between the curb and sidewalk on North Trade Street and asking the businesses to help with a small percentage of the costs.

Excited about the rail car coming to Landrum, Caplan gave the council members an update about the railway museum and the first meeting of the interim museum board. He said though they have not made a definite decision, the board discussed the theme of the museum centering around how the railroad changed Landrum and the surrounding areas.

In other business during the city council meeting, Briggs swore in Landrum’s new police officer, Marissa Dent. Originally from Greer, she currently lives in Anderson, and was working at a women’s correctional facility. She said she plans to move back home to the Landrum area as soon as her lease is up.

Briggs announced that council members Daniel Prince, John Carruth and Billy Inman were all absent because of conflicting meetings or medical and personal issues.