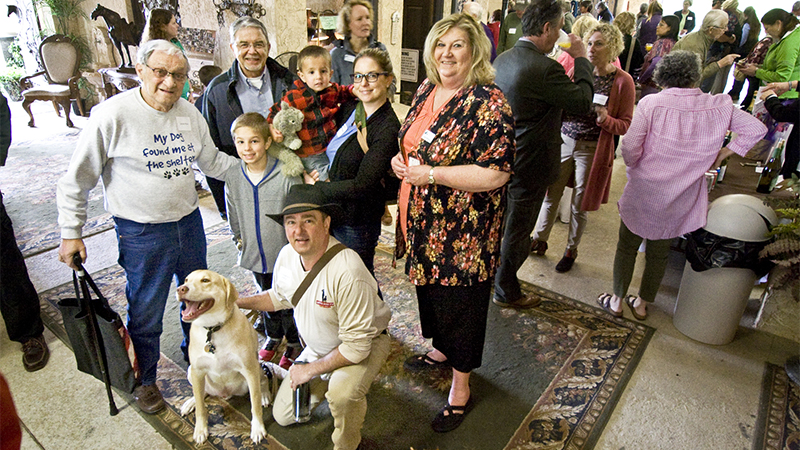 Bill Brightman (rear), director of Service Dogs for Veterans, meets with Lennie Rizzo (left) and Linda Williams (right), FHS board member, as well as, and SD4V participants and family. (Submitted by Vincent Verrecchio)

Animal Fair is the big fundraiser for Foothills Humane Society, and 2018 was another winner for the many cats and dogs at the shelter and for the many generous folks in attendance at Spiegel Farm, organizers said.

“The number of sponsors and donors exceeded expectations,” said Chris Taylor, FHS executive director. “Based on comments and expressions at the event, I’d say ticket holders were happy to be there.”

This year, fairgoers got to meet puppies, kittens, an iguana and miniature donkeys and horses — the latter in a stall next to a very large draft horse. If a mini stretched up, it could just touch its neighbor’s nose.

Veterinarian Iain Fitch played his collection of Native American flutes before and during dinner. During dessert, Bill Brightman, founder and director of Service Dogs for Veterans, hosted a program with veterans sharing their experiences with post tramatic stress disorder as their beloved dogs sat next to them on stage. 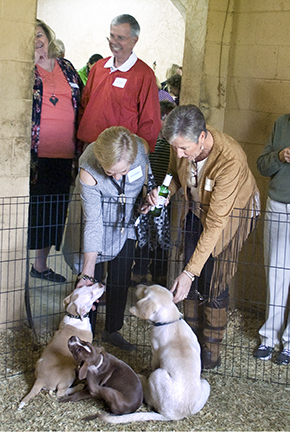 Next, Susan Wallahora, FHS president, officially launched the first phase of the shelter’s capital campaign, New Dogs for Dogs, and explained the Foothills Forever Wall. Qualifying New Digs donations would earn custom photo-tiles, featuring images of the donors’ pets. All would be permanently displayed in the new facility.

Lennie Rizzo, the first recipient of “The Lennie” awarded by the Foothills Humane Society in 2017, announced his selection for the second year, Lori Jewell, founder and owner of Pet Tender Angels Rescue and Rehab.

Afterward, outside, carriage rides took place under a blue sky.

“A few people did complain about eating more from the dessert spread than they should have,” Wallahora said.

“And of course, not everyone could take home a prize from the benefit raffle, but there was a lot of clapping when I called numbers,” added Linda Williams, FHS Board member and raffle chair.