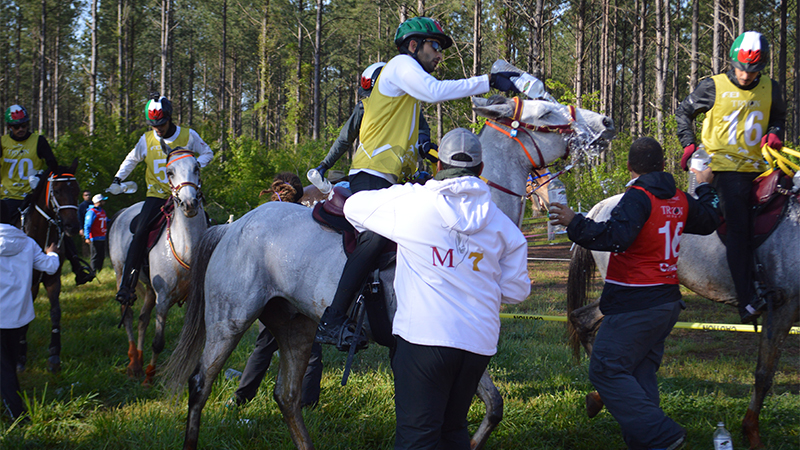 Team members hand water bottles to their riders as they pass through a Green Creek checkpoint in the Endurance trial for the World Equestrian Games. (Photo by Catherine Hunter/Tryon Daily Bulletin)

GREEN CREEK — Languages from around the world flowed out across a grassy field glistening with dew Saturday morning.

The tense feeling of anticipation hung in the cool morning air.

“Horses!” an FEI Steward called out, as hoof beats muffled on pine needles drifts to the waiting crowd.

Sleek Arab horses with red-rimmed nostrils and steam rising from their haunches slowed to a walk, as they entered a corridor marked by white tape. Crewmembers dressed in red and yellow vests handed the riders bottles of water to pour over the horses as they walked by.

The horses did not stop as half empty bottles plopped to the ground and riders gathered their reins. Before the ground crew knew it, the horses were off again at a ground-eating trot as they headed out for the next checkpoint.

Sheikh Rashid Dalmook Al Maktoum came in second, riding Toumani Eureka, an 11-year-old gelding. Members of the UAE team all rode together, and took third and fourth places as well.

T.J. Vore, of Tryon, was on hand to crew for Irish Rider Jane Moss. Vore is competing for a spot on the U.S. Endurance team at Biltmore this coming weekend. Vore said most 75-mile endurance rides can take up to 18 hours for some riders to finish.

“Of course, at this level, they’ll finish in eight to 10 hours,” she said.

She added that the WEG Endurance ride in September will be 160 km (approximately 100 miles) and should take the riders 10 to 12 hours to finish.