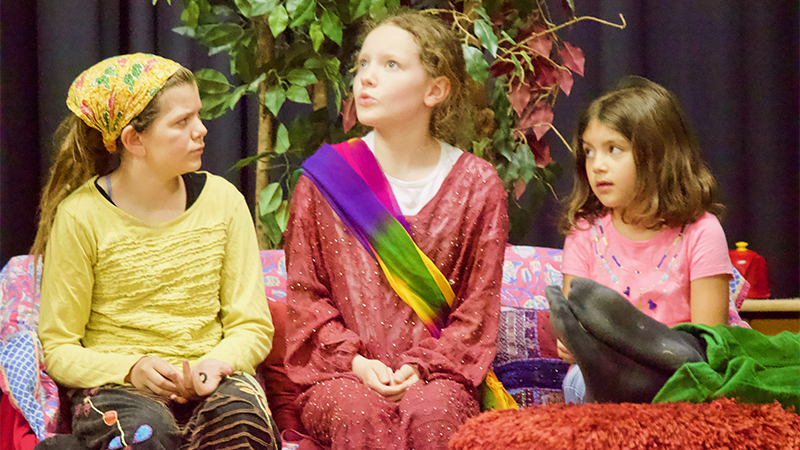 Ariana Wood (left), Zetta Anderson (center) and Natalie Clark rehearse a scene from the upcoming production of “The World According to Humphrey” on Tuesday. The community-led project will be presented to audiences for free at the Saluda Elementary School auditorium. (Photo by Ted Yoakum/Tryon Daily Bulletin)

SALUDA — For the past several months, children at Saluda Elementary School — and the community at large — have learned that even “the smallest person can make a big difference.”

With that in mind, just imagine how big an impact can be made when students, teachers, parents and others join forces to achieve  a common goal.

On Thursday, people are invited to the Saluda school’s auditorium to witness just what the community has been brewing up the past several weeks. 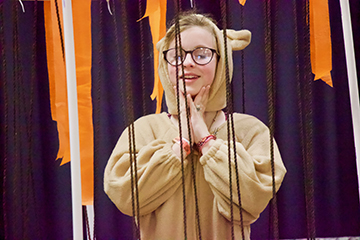 Tori Strickland, who plays the titular hamster in the play, rehearses a scene. (Photo by Ted Yoakum/Tryon Daily Bulletin)

At 6 p.m. that evening, the school will host a stage adaptation of Betty Birney’s popular children’s book, “The World According to Humphrey.” The free play will be performed by a cast of fifth-grade students at Saluda Elementary, as well as several former Saluda students now in middle school, with the assistance of local adults who are producing the show.

The play is the culmination of the school’s second-ever “One Book, One Community” program, designed to encourage children to do more reading outside the classroom.

In October, students were given a copy of “The World According to Humphrey” — a story about a classroom pet hamster who spends his weekends staying with different students, learning more about each of the children and helping them with their problems in the process.

“It’s all about building relationships, seeing different perspectives and making a positive difference,” said Saluda Elementary Principal Cari Maneen. “That is what we want for kids to get out of this book.”

This is the second year that Saluda has done “One Book, One Community.” Around two years ago, they gave students a book called “The One and Only Ivan,” a story about a silverback gorilla who lived in captivity inside an old shopping mall.

While school officials originally focused their efforts on getting just children to read the book, almost immediately, parents, grandparents and others in Saluda hopped on board, reading alongside the students. The book took on a life of its own, with the Saluda Welcome Table hosting an Ivan-themed picnic at McCreery Park to celebrate the program.

To cap the program off, the community and students worked together to produce a play based on the book, titled “An Evening with Ivan,” written by Saluda’s Rob Parsons. The performance surpassed all expectations, with the school auditorium nearly filled to capacity for the show, said Amy Wood, one of the organizers of the event.

Based on the success of that performance, Saluda set out to make the adaptation of “The World According to Humphrey” a grander affair, with a larger cast, longer run time and more in-depth production than the show two years ago, Wood said.

The producers are hoping that the play will encourage other locals to read “The World According to Humphrey,” and to come together to celebrate the youth in the community.