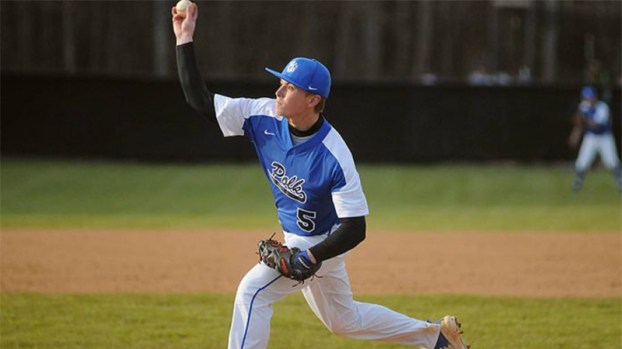 Polk County senior Tyler Harris allowed two hits in six innings and had a hit at the plate in Wednesday’s win. (Submitted by PolkSports.com)

Polk County clinched a share of its first conference baseball title since 2012 on Wednesday, handing Mitchell a 12-6 defeat in Western Highlands Conference action in Ledger.

The Wolverines also wrapped up the WHC’s automatic 1A playoff berth with the win.

Leading 3-2 after three innings, Polk pushed across a pair of runs in the fourth as Grayson Jones reached on an error, Rimer doubled and both scored on an error on a Nick Capozzi grounder, giving Polk a 5-2 lead.

The Wolverines added four runs in the fifth, all with two outs. Jones smacked a two-run double to right field and Rimer added an RBI single to highlight the inning.

The Wolverines added a run in the sixth as an error on an Elijah Sutton grounder allowed Kaleb Kropp to score, then tallied twice more in the seventh on a Capozzi RBI double and a two-out error that allowed Capozzi to score.

Tyler Harris earned the win, allowing two hits, walking five and striking out two in six innings of work. Kyler Scruggs struck out two and allowed one hit after relieving Austin Geagley in the seventh inning.

Jones finished 1-for-4 with three RBIs.

Polk County roared back Wednesday from an early 1-0 deficit to hand Owen a 3-1 setback in a Western Highlands... read more