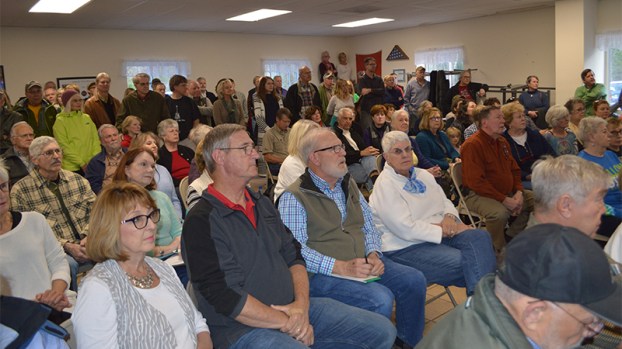 It was standing room only as 150 to 200 concerned citizens packed shoulder to shoulder into the Saulda Fire Department for the Monday night Save Saluda meeting. (Photo by Catherine Hunter/Tryon Daily Bulletin)

SALUDA— It was standing room only as 150 to 200 citizens packed shoulder to shoulder into the Saluda Fire Department.

The Save Saluda group hosted a community meeting Monday night to discuss a strategy to fight the proposed law enforcement center and possible shooting range near the North Carolina Game Lands and overlooking the Green River Gorge.

At the request of Henderson County Sheriff Charles S. McDonald, the county has placed $1,000 in escrow for 99 acres located at 2823 Macedonia Road in Saluda. The property is just within Henderson County, is managed by an estate out of Asheville and backs up to the North Carolina Game Lands.

“They are supposed to close within 60 days,” said Asheville attorney Brian Gulden, who has successfully fought the construction of a similar facility in other locations.

Gulden continued saying that the sheriff’s department has not clearly outlined the purpose of the proposed $6 million project.

“They haven’t done a summery of what he actually wanted to do with the facility once it is built,” Gulden said. “He [McDonald] did mention the possibility of a 911 call center.”

A woman from the crowd piped up saying she wished them luck with that because, “We all know what the internet is like out there. There is none.”

Gulden said the planned facility would have to go before the zoning board.

“They [Henderson County Commissioners] will have to get a special use permit to build this facility in this location,” he said.

Gulden explained the project would have to go before a zoning board and meet three standards to determine if the shooting range is within compliance. The facility cannot materially damage the public use or the health or welfare of the residents, it cannot damage property improvements in the area and must be in harmony with the surrounding area.

After the last statement about being in harmony with the surrounding area, the crowd burst out with guffaws and laughter.

Gulden displayed a map of the area upon which had been drawn circles showing the required setbacks from streams and water sources, from other buildings and from residences. The circles overlapped showing there was little room in which to build the proposed 6,000 square- foot project.

Gulden pointed out that some of the buildings would cross into the 100-foot setbacks and said,

“The commissioners haven’t even considered if this piece of property complies with their ordinance,” he said.

“End of subject” said a member of the crowd.

Gulden, along with owners of property adjacent to the land for the proposed training center, encouraged residents to show up to the Wednesday morning commission meeting in Hendersonville and let their voices be heard.

Other points brought out during the Monday night meeting included the fact that there are several law enforcement training facilities and shooting ranges within a half-hour drive of Hendersonville. Hrynyshyn said there is a facility in Edneyville that is only at 60 percent capacity.

Other concerns included environmental problems including lead contamination. Others mentioned a wetlands in the center of the property where bald eagles are nesting.

Area business owners expressed concern about the damage to their outdoor recreation businesses that depend on the game lands and the Green River for their livelihood. Farmers in the area expressed concerns about water table contamination and the threat to livestock and land values.

Members of the crowd pointed out that the commissioners were set to vote on the issue the day before the election primaries on May 8. Several politicians in the crowd spoke up, saying they were against the proposed facility being located in the area.

A few attending the meeting spoke up for the need of adequate training for law enforcement, though they also adamantly opposed the facility being located on the proposed property, saying it was not the right fit.

Adjacent property owners Tom and Susan McHugh and former Henderson County Commissioner Don West stressed how important it is for people to show up at the Wednesday morning meeting.

“You need to get organized and speak from the heart,” West said. “Do your research and don’t make up any facts. The more that’s there the better.”

For more information about Save Saluda or to donate funds contact: Susan McHugh at 828-674-2097 or email susan@saludalandfinders.com or visit the Save Saluda – No Outdoor Shooting Range on Macedonia Road Facebook page.