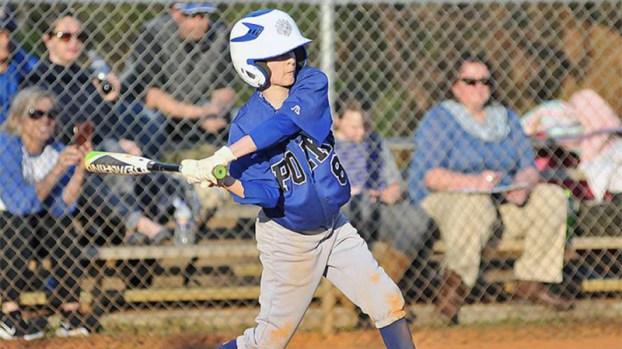 Evan Jones had one of Polk County’s eight hits in Thursday’s victory. (Submitted by PolkSports.com)

Barber carried a no-hitter into the sixth inning, when Madison managed a leadoff single. The Patriots pushed that runner to third, but Barber induced an infield grounder to end the game.

Polk Middle (3-4) produced all the runs it would need in the third inning, thanks in part to Weaver. With the bases loaded and one out, Weaver cleared them all with a home run, giving Polk a 4-0 lead.

The Wolverines then tallied five times in the fifth. Coble Cameron singled, Jackson Beiler reached on an error and Weaver walked to load the bases. Lawson Carter then drilled a double to drive in all three runners and make it 7-0 Polk.

After Barber drew a walk and Madison recorded two outs, Evan Jones reached on an error to drive in Carter. Jackson Tipton then singled to plate Barber with the final run of the game.

The Wolverines return to the field on Monday, traveling to face Bethel Middle.