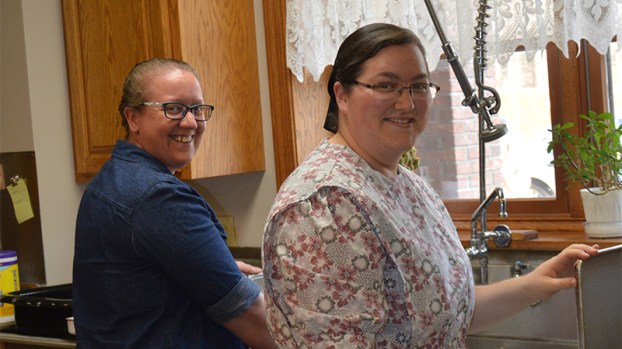 With more than 1000 people attending each spring and fall, the semi-annual event is always a highlight in the community.

The event started 18 years ago as a fund-raiser to build a new church building and soon became an outreach for the community. Funds from each event go to help support local fire departments and other community projects.

“This year the funds will go to help homeschooling and private schools around Polk County,” Chupp said. 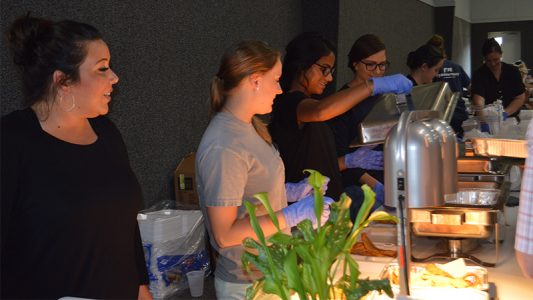 Though the food is simple, it has a reputation for being delicious and the desserts are “to die for.” The ladies of Foothills Community Chapel make the deserts, such as pies, cakes, pralines and even sugar free deserts. The men man the fryers out back where volunteers from the community and church members fry filets of Alaskan Pollack fish, hush puppies and french fries to a golden brown.

“The food is all American sourced,” Chupp said.

“I especially like the desserts,” said Joanne Thurow who lives about a mile up Highway 14 from the chapel.

While the food is, “really good,” according to Kim McCool of Tryon, most of those showing up also come for the company.

“It’s great for the community,” McCool said. “You can see people sitting around talking. A lot of these people haven’t see each other in a while.”

Suggested donation for a plate is $12. Folks stand in line in the sun waiting to get in and either join their friends at the table or take a plate home or to friends who couldn’t get to the chapel.

The church members handle everything from parking cars to serving food. The men (and a few women) gather in an outdoor kitchen behind the church building to fry the fish, hush puppies and French fries. Women and the older girls handle the serving lines and the children run the food between the fryers and the kitchen.

More church members work in the main kitchen washing dishes, and preparing sweet and unsweet tea. Others walk up and down the rows of tables picking up finished plates and chatting with the guests.

Chupp said they started with a small, two-burner cooker. Today it takes the entire congregation to put on the event. At least 100 church members were there working Thursday night, and other members of the congregation have been working for months to bring everything together.

“A lot of people in the community look forward this event,” Chupp said. “Sometimes this is the only chance they get to see some of their friends and neighbors.”

Tryon Elementary principal Todd Murphy has been selected as the next principal at Polk County Middle School. At its regular... read more