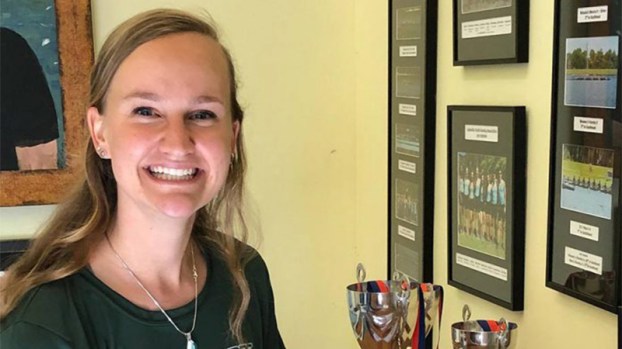 “In my family, it’s been a big sport. My grandparents rowed, my aunts and uncles, and now my siblings and cousins,” Scarlett said.

So it seemed only natural that Scarlett targeted a college rowing scholarship, a dream she made a reality on Wednesday when she signed a national letter-of-intent to row at Stetson University in Deland, Florida.

Scarlett signed her letter in a ceremony at the Jack Gartner Boathouse at Lake Julian Park in Arden, headquarters of the Asheville Youth Rowing Association, where Scarlett has competed since moving to Polk County last summer.

Though not the first Polk County graduate to row at the college level — 2015 grad Sarah Phipps spent a year with the University of North Carolina program as a walk-on — she is the first Wolverine to receive a college scholarship in the sport.

“She is a true player and a very mature young woman,” said Gartner, who serves as AYRA’s head coach. “She will do well at Stetson.”

Family ties helped bring Scarlett to the water, but she has also developed a passion for rowing in her six years in the sport.

“I like how competitive it is,” said Scarlett, who moved to Polk County from Sarasota, Florida. “It’s not a sport that a lot of people know about here. You have to really work for what you want. It gives you such mental toughness to go out and do it.”

Scarlett began thinking seriously about rowing at the college level during her sophomore year.

“It’s the one thing that I’ve been sure of since I began high school,” she said.

Having already graduated from Polk County High School at the end of the fall semester, Scarlett is eager to start the next phase of her life at Stetson.

“I’m super excited,” she said. “This is the first year they’ve not been a club team, so I’m really excited to help them build their team and be part of that.”

Scarlett’s signing marks the eighth year that AYRA competitors have been recruited to row in college; the program currently has five alumni rowing at North Carolina and another at Jacksonville. Past members of AYRA have gone on to row at Brown, Clark University, Worchester Polytech, Georgia Tech, Vanderbilt, Puget Sound, Temple, Rutgers and Stetson.

The program will next compete this weekend in the North Carolina Youth Rowing Championships in High Point.

Polk tennis bounces back with win at East Henderson

Polk County rebounded from Tuesday’s loss to Owen with a pair of wins Wednesday over East Henderson in a nonconference... read more