Polk gets back into form, blanks Mitchell, 4-0 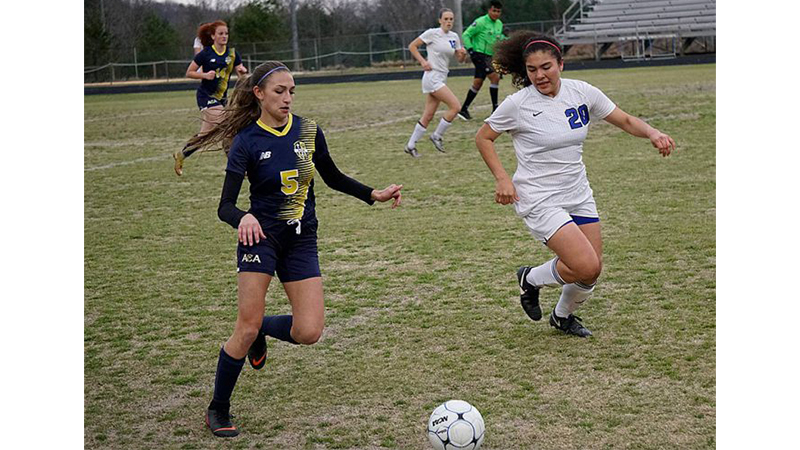 It took Polk County’s girls soccer team a while Monday to shake off the rust from spring break.

But brush it off, they did.

Back on the field for the first time in 12 days, the Wolverines pulled away late to hand Mitchell a 4-0 defeat in a Western Highlands Conference match at G.M. Tennant Stadium.

Polk County (5-5, 2-1) led just 1-0 at the half despite controlling play much of the opening 40 minutes. That remained the case in the second half as Mitchell (0-7, 0-3) rarely pushed the ball past midfield.

The Wolverines finally got a pair of second-half goals from Jen Guerrero and a late tally from Lauren Ketwitz to make certain the Mountaineers would spring no upset.

“We got into a better rhythm in the second half. Even though we had the better of things in the first half, I didn’t feel we played great. I thought we played much better in the second half overall. The opportunities we created were much more deliberate.”

Ava Marino gave Polk County its halftime advantage with a goal at the 24:36 mark of the first half. Racing a Mitchell defender for a ball played in the penalty area, Marino reached the ball first and poked it past a charging Mitchell goalkeeper Brandey Burleson to give the Wolverines a 1-0 lead.

Guerrero made it 2-0 with 27:34 left in the match on a short blast from just in front of the net. She added her second tally with four minutes left on a shot that hit the underside of the crossbar and bounced just over the goal line.

Ketwitz closed the scoring with 1:51 remaining on a header.

Reese Alley had a pair of assists and Belen Akers and Baylee Love added assists for Polk. The night proved a tough-luck evening for Alley, who failed to score despite drilling shots that hit the left and right posts and top crossbar.

Willow Arkell had three saves for Polk County, who returns to conference action on Wednesday at Mountain Heritage.

Wolverines 12th Man hopes to boost football at all…