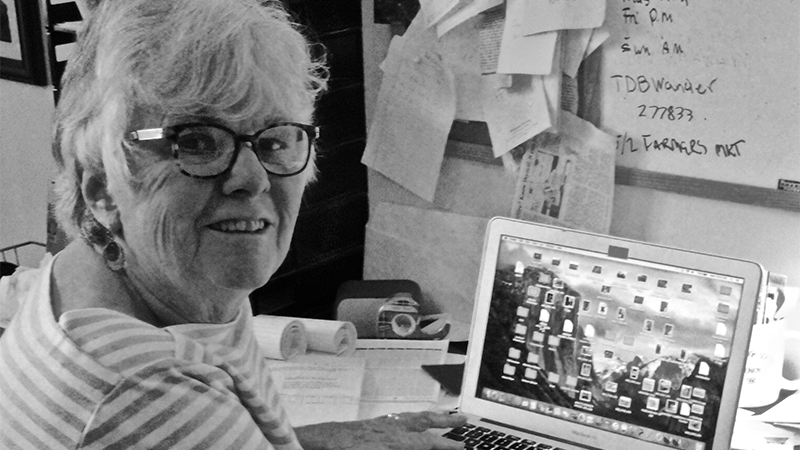 About four years ago, I was newly arrived in the Carolinas.

After owning several businesses, I found myself actually retired.

“What now?” I asked myself. Friends inquired as to what my plans were for retirement.

“I’m just going to wait and see where life takes me,” was my answer.

One day, I read a paragraph in the Tryon Daily Bulletin. Samantha, the editor at that time, was looking for someone who would be interested in writing a column about the Landrum area.

“It’s people, places, things that readers might not know about Landrum,” she explained when I discussed the idea with her.

She offered to give me a chance. “We’ll see how it goes after a few months,” she said.

So, four years later, I’ve been meeting people, traveling the back roads and writing about what I discovered in my wanderings.

Early on, I did a series on women business owners, one of my favorite topics, as I have been a woman business owner. Summertime found me at the farmers market, highlighting different vendors.

Campbells Covered Bridge is still a favorite spot to escape from the modern day world. I remember my trip to Tigerville and locating a Revolutionary War soldier’s grave, bringing history to life.

The messages on the old graves at Jackson Grove Cemetery introduced me to the former inhabitants of the area. Driving by the old Monk Institute in Campobello, I can still envision the young students, way back when, who lived and studied there. Touring that old building, built with bricks made by the students, is a favorite memory of the past four years.

I wanted to learn about Landrum’s history, and my readers responded.

Thank you to those who called and chatted with me, sharing their memories. These old buildings are still today filled with wonderful shops and restaurants.

The Halloween scarecrows signaled the beginning of fall. Exploring for stocking stuffers and sharing my discoveries made Christmas shopping fun.

Trying to find my way home while following the Palmetto Trail was another adventure. Looking for Rainbow Lake, visiting Christmas Hill, traveling to Glenn Springs, were all “wanderings” that brought special memories.

I count myself fortunate to have had the opportunity to interview D.M. Wolfe and Hugh Foster. The saga of their family’s history and D.M.’s travels to the Scottish Isles to buy horses is a treasure.

D.M. passed away not long after I was able to record his yarn. Rest In Peace D.M.

Frank’s Music Hall in Gramling was an unexpected discovery. It was Frank’s Coffee Shop when I stumbled in one morning, only to learn it was home to pickin’ and playin’ along with coffee and brownies.

I’ve met so many wonderful people who have added to my life here in the Carolinas. I want to thank everyone who shared their story with me.

When a stranger would approach me on the street or in a shop to tell me how much they enjoyed my column, I was gratified to know that I had brought a few minutes of enjoyment into someone’s life.

I want to thank the Tryon Daily Bulletin for giving me the opportunity to write Landrum Wanderings. What started as a few months trial has been an exciting four years.

And so, it’s time to say good-bye to my readers.

My sister and I will still be offering recipes and cooking tips in “Our Two Sisters Cook” column. And you can stop and say hello at my cookie table at the Landrum Farmers Market. Don’t forget, the market starts May 5. Hope to see you there!