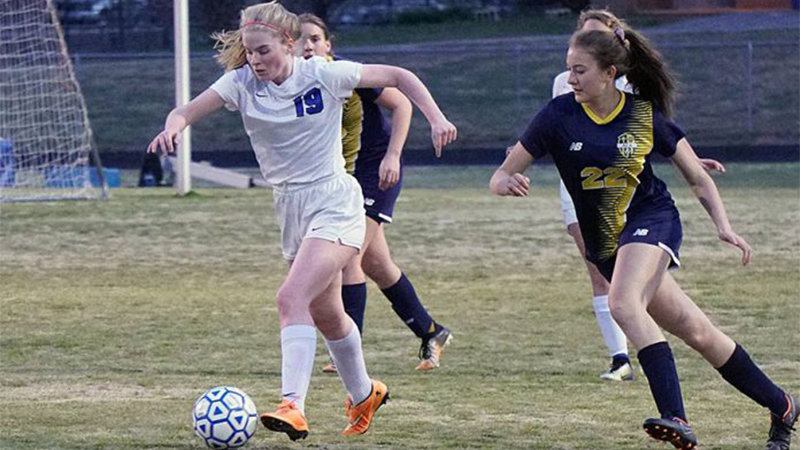 Polk County’s Sydney Metcalf and the Wolverines will be chasing a conference title throughout April. (Photo submitted by PolkSports.com)

There could be a few of those to be had, too.

Here’s a look at what’s ahead for Wolverine baseball, girls soccer, softball and tennis teams in their WHC title chases:

BASEBALL: The Wolverines sit atop the WHC standings, and in the best shape of any conference team as far as remaining games to be played.

Weather has played havoc this spring with conference schedules, but Polk has managed get nine games in, posting a perfect 9-0 mark as part of its 12-2 overall record. Second-place Mitchell sits at 5-3 in league play, with Mountain Heritage at 3-4, Owen at 2-5 and Avery at 0-8.

Mitchell is the focus of Polk County’s attention for another reason — the Wolverines want a WHC championship, but they also want to finish ahead of Avery and Mitchell to be the league’s top seed for the 1A playoffs.

The two teams are scheduled to meet Friday at Polk County. The Wolverines already own a 9-4 win over Mitchell earlier this season.

Polk County’s next four conference games include two dates with Mitchell and two with Mountain Heritage, putting the Wolverines’ hopes for their first WHC title since 2012 firmly in their hands.

GIRLS SOCCER: It is still early in the conference race, with each team having played just two of 10 scheduled games.

Polk County sits at 1-1, a game behind Madison and Owen. At 6-1-1 overall, the Warhorses are the early favorite for the league title, but a 1-0 loss to Owen showed that Polk County can be a factor as well.

Owen and Madison are scheduled to meet Wednesday in a match that should tell whether the Patriots (3-0-1, 2-0) are for real.

Polk County (4-5, 1-1) will be keeping an eye on that match but also are watching Mitchell and Avery in the 1A race-within-a-race. The Wolverines are scheduled to host Mitchell on Monday and then face a key stretch next week, traveling to Madison and hosting Owen.

SOFTBALL: Polk County’s back-to-back wins over Owen just before break moved the Wolverines into a tie for second in the conference race, two games behind undefeated Madison.

Polk (7-4, 6-2) dropped a 6-5 eight-inning decision at Madison earlier this season but still has two meetings left with the Patriots, both of those at season’s end. Madison has also yet to play Owen, so the conference race is still very much undecided. Polk County could assure itself a league title by sweeping its remaining seven conference games.

With Avery and Mitchell at 0-7 in the WHC standings, Polk County is very much in the driver’s seat for the top 1A seed.

The Wolverines (6-1, 2-0) will host undefeated Owen on Tuesday, then will close the season April 19 at Owen. Those two matches will likely decide the WHC regular-season champion.

With Avery the only other 1A team competing in boys tennis, Polk County is in prime position to be the conference’s top playoff seed.

The methodology for seeding and determining state playoff qualifiers has changed since the fall sports season.

• Fourty eight teams will qualify for each 1A playoff bracket

•  The 48 qualifiers will be divided into East and West brackets

• All conference champions/one seeds will be seeded first, followed by two seeds and then all at-large teams. Adjusted MaxPreps Ranking will be used to seed teams in each group.