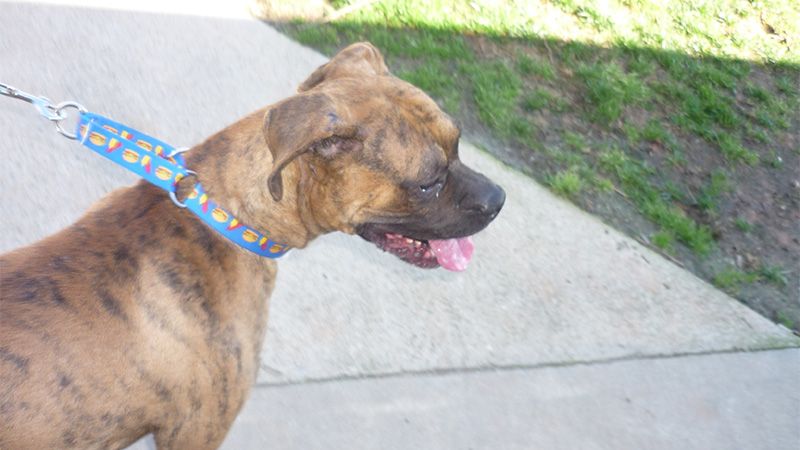 It was Holy Thursday, and I was sitting at T.J.’s restaurant, quietly having breakfast.

I had just taken on another major case with a dear friend that I had worked with more than once, and I was mulling over how I would make finances available. All the proper people in place, I’ll explain more in the future.

Louey, the beautiful 1 ½ year old brindle Boxer, was due to be neutered on Friday, and finding him a perfect home was on my mind. I sent up a silent prayer and began making out a list of where to place flyers for my up and coming gala.

“Excuse me Mr. Rizzo,” said Bob, one of the construction workers I see often at T.J.’s.

“I read your article in [Foothills] magazine. I love Boxers, too, and I wonder if you have one available.”

I looked up to the heavens and smiled. “Sit down Bob, and let me tell you about Louey.”

After a lengthy conversation of me describing Louey’s life and what would be required of anyone who would give him a new home, Bob excitedly pounded me with questions.  “How much will it cost for him? When can I see him? How soon can I have him?” etc.

This time I laughed and said, “How about right now?”

Bob had to go to work, so we met at Landrum vet at 4 p.m. I had already cued the staff on what I was doing.

I arrived early and caught up on all of Louey’s bills, $1,200, with his neutering and a microchip, which I insisted he received. Bob said he’d gladly pay the whole bill, but I told him just leave a large donation so I could help others.

Bob pulled up to Landrum vet exactly at 4 p.m.

I had seen that Louey was let out a bit earlier so he’d calm down a bit. Over a month in his cage made the youngster over excitable when he was let out. Bob and I spoke awhile as a staff member went to fetch Louey.

I sensed the look of anticipation on Bob’s face and when Louey came charging out like gang busters, Bob’s heart was stuck in his throat.

“He’s beautiful,” Bob blurted out, with tears in his eyes. Louey, for his part, ran toward Bob like he was the long-lost owner that he’s been waiting for.

Bob took Louey for a walk around the compound for a meet and greet and, when they came back, Louey rolled over for a tummy rub.

On Friday, Louey was neutered, and first thing Saturday morning, he was adopted by Bob with brand new tags, collar and microchip. Bob gave $500 toward Lennie’s kids and said, tearfully, “I don’t know how to thank you, Mr. Rizzo. We are perfect for each other.”

I hope you all had a happy Easter. Mine was perfect.

Leonard Rizzo, of Columbus, is the founder of the nonprofit Foothills animal support organization Lennie’s Fund, and is the author of “A Voice in the Hills.”