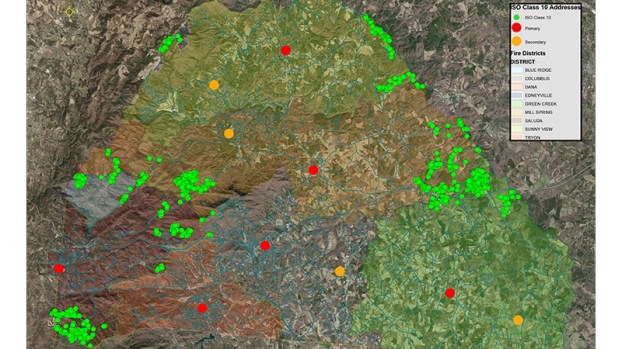 More paid fire staff may be on Polk’s horizon

COLUMBUS — Many areas of Polk County have an ISO 10 rating, which is the highest in terms of homeowners’ insurance because of their distance from a fire department.

The Polk County Board of Commissioners reviewed a map of the ISO ratings with Polk County Emergency Management Director and Fire Marshal Bobby Arledge in March.

“That means they realistically have no fire protection,” Arledge said.

A class 10 ISO rating is anything outside of a 6-mile distance from a fire department. Any rating between a 9 and 1 is within 5 miles of a fire department, Arledge said. The majority of Polk County is rated as a ISO 9, which is a significant savings on homeowners insurance.

Arledge said Columbus is a class 5 and Green Creek is a 6/9 split, for example, depending on how close the home is to the fire department.

“That’s why it’s important to get as many as we can that’s not a class 10,” Arledge said.

Commissioner Ray Gasperson said the ISO ratings are something commissioners should review.

Gasperson said it is interesting that a class 10 is essentially an unprotected class, even though TIEC has fire hydrants and water. He said it is the mileage factor that is the trigger.

ISO ratings are done based off departments’ equipment, training and staff, as well as the home’s distance from the fire department.

“Road miles is your trigger,” Arledge said. “It doesn’t matter how long it takes to get there.”

Commissioner Shane Bradley said there is a lot of work that goes into the ISO ratings, and most of the county’s departments are looking into substations because it makes a big difference.

Gasperson said even if there is a substation, much of the county will still be rated as a class 9.

Gasperson said the reality is, Polk County is faced with having to have more paid staff at its fire departments.