People invited to come ‘tie one on’ Saturday 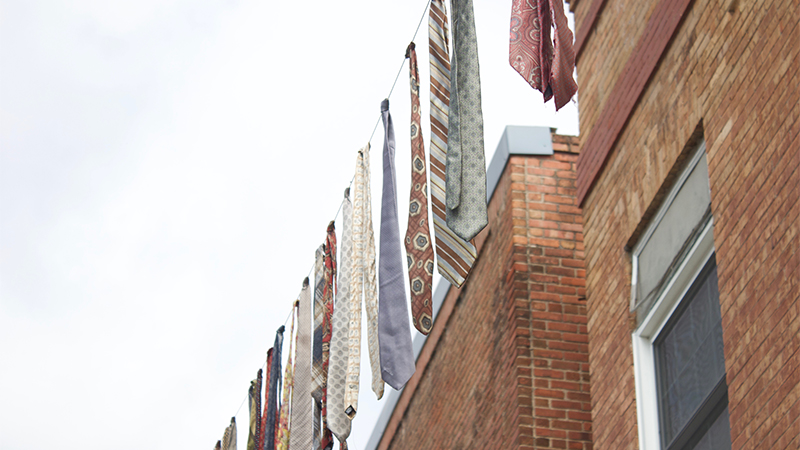 The hundreds of ties strung up along Trade Street can only mean one thing: that the Tryon April Fool’s Party is about to return. The festival is slated to take place this year on Saturday. (Photo by Ted Yoakum/Tryon Daily Bulletin)

TRYON — The joke will be on those who choose to stay home this weekend, as Tryon will once again host one of its most unique — and beloved — celebrations on Saturday.

The Tryon Downtown Development Association and Tryon April Fool’s Festival will once again host the Downtown Tryon April Fool’s Party, which will take place from noon to 5 p.m. on Trade Street. Among the festivities on the docket that afternoon include a variety of games and activities for the entire family to enjoy at St. Luke’s Plaza, in addition to performances by street musicians throughout downtown.

Among the games taking place at the plaza include the popular mat game, Twister; a game called Elephant March, where competitors place pantyhose over their heads and try to knock over water bottles with their “trunks;” and Paint by Numbers, a group art activity where people may  color a certain portion of a canvas set up in the plaza. There will also arts and crafts for children, including necktie decorating and sidewalk chalk.

All activities will be offered for free to visitors.

Guests will also have the chance to see the hundreds of neckties that are hanging from the light poles on Trade Street, which city crews put up several weeks ago. Of course, visitors will have the chance to stop by downtown Tryon’s different shops that afternoon as well.

Organizing this year’s April Fool’s festival is Jamie Carpenter, executive director of the TDDA, and others in the community.

“[The festival is] a unique event to Tryon,” Carpenter said. “It really captures the quirkiness of the town.”

The first festival was organized years ago, after a parade scheduled to take place on St. Patrick’s Day was rained out, which forced organizers to move the event to April. They subsequently decided to keep the event in the first part of April, and transformed it into a celebration of April Fools’ Day.

Appropriate to the theme, the festival reveled in all things foolish and goofy. In addition to hanging ties up on the street — a play on the phrase “tie one on” — organizers set up activities such as the “Outhouse Races,” where people attached wheels to their old latrines and raced them down Trade Street, Carpenter said.

When the festival went on a hiatus in 2016, it was noticed by many around town, Carpenter said.

“We had a lot people say to us, ‘gosh, I’m going to miss seeing all the ties get strung up along the street,’” she said.

A year later, the TDDA resurrected the festival, albeit smaller than before, Carpenter said.

With the final phase of the town’s streetscape construction taking place on Trade Street this month, the organizers again decided to bring back the April Fool’s Festival in smaller form this year as well. However, Carpenter said she and others would love to bring back the Outhouse Races and other old favorites from previous events for future years.

“It’s a good, family-friendly event — one that we would love to bring back to its former glory one day,” she said.

For more information about the event, may contact the TDDA at 828-859-6484 or may visit downtowntryon.org.