Episcopal Church of the Transfiguration to host preservation fundraiser June 23 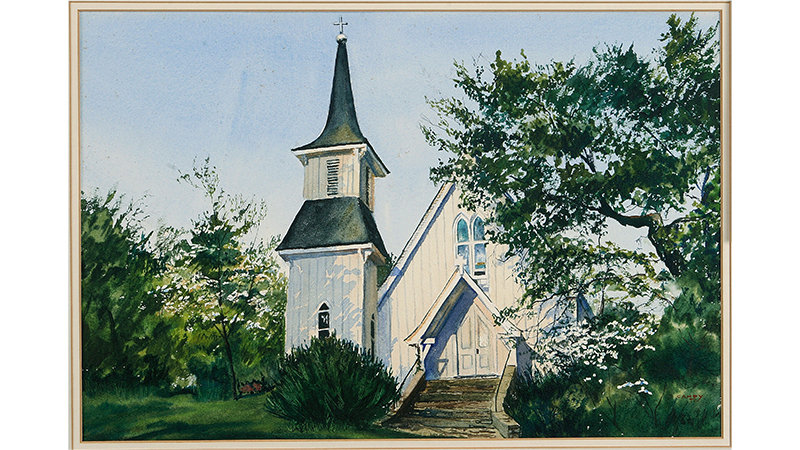 A painting of Saluda’s Episcopal Church of the Transfiguration. (Painting by Dot Yaghan)

The Episcopal Church of the Transfiguration, one of the oldest buildings in Saluda, was founded by South Carolinians who began to come to Saluda in the late 1800s.

They were assisted by the missionary priest John DeWitt McCollough, an accomplished but untrained architect. He recruited young workers from the area, including a group of theological students from the University of the South, to assist in construction of his original design.

The church was consecrated in 1891.

An example of “carpenter Gothic” architecture, the church features an altar carved by McCollough, pews made of heart of pine, church furnishings from the late 19th century and stained glass windows installed from the earliest part of the 20th century to the present day.

To ensure that there will always be funds available to preserve this historic church in good repair, there is a gala fundraiser scheduled for June 23 at the Saluda Center. Titled “Art for Preservation,” the gala will focus on fine art and craft in Saluda.

Saluda area artists will be present to demonstrate their craft while guests stroll and observe. There will be art for sale along with a silent auction with fine art and other premium selections available.

Saluda cooks are preparing heavy hors d’oeuvres. Beer and wine will be served.

Parishioners are donating items and paying for expenses to ensure all the proceeds will be used solely to benefit the physical plant of Transfiguration.

A structure almost 120 years old has many needs. The church is a haven open to all, and is cared for the Transfiguration congregants.

The financial support of the community will ensure its future as a part of this historic community.