Connecting knowledge with the humanities 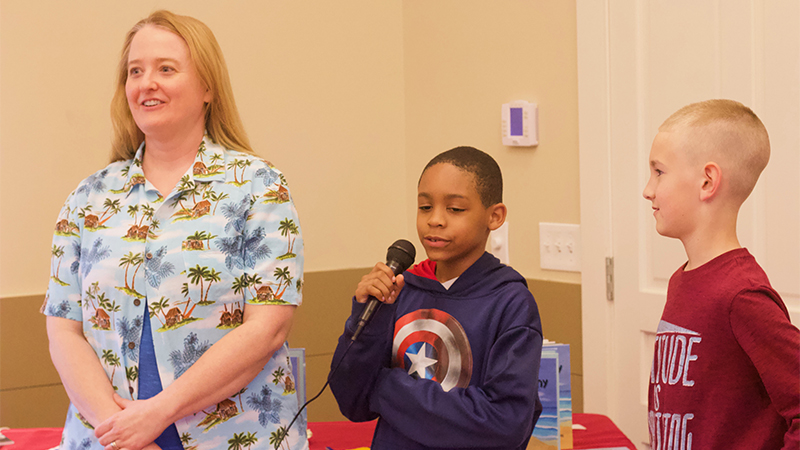 Author Kimberly Roberts and a pair of O.P. Earle Elementary School students discuss the geography lesson on the islands of the Caribbean Roberts recently presented to the school’s fourth- and fifth-grade classes at the Landrum depot Tuesday evening. Roberts and Jon Becraft, an artist educator with nonprofit theater company Kentucky Shakespeare, were welcomed by local children, parents and others in the community during the latest Kessler Cultural Evening reception at the downtown train station. (Photo by Ted Yoakum)

LANDRUM — It is not every day when a group of elementary school students get the chance to explore the 7,000 tropical islands that make up the Caribbean, or are able to jump into the boots of a fantastical character from the pages of a beloved fairy tale — all without leaving the classroom.

This week, a pair of traveling artists stopped by Landrum’s O.P. Earle Elementary to give a number of classrooms some unique lessons, which combined the imagination and creativity of the fine arts with the knowledge and skills the children have already been studying in class.

On Tuesday, author and performer Kimberly Roberts dropped into the school’s fourth- and fifth-grade classrooms to present a special crash geography course on the Caribbean. Roberts, of Lexington, South Carolina, brought one of her books, “Jammin’ Geography – Caribbean Cruise,” which she shared with the students to give them a better look at the different places and faces that make up the chain of islands.

“When students think of the Caribbean, they think palm trees and pirates, and that’s about it,” Roberts said. “The book was designed to teach them that each of the islands are different from one another — they have different cultures, and different languages they speak.”

Elsewhere in O.P. Earle that day, Jon Becraft, an artist educator with nonprofit theater company Kentucky Shakespeare, visited a group of Kindergarten students. Becraft worked with the children to put on a series of mini-plays based on three different fairy tales from around the world.

“[The children] learned about the basics of storytelling, as well as different cultures, and the values that cultures have — and how those values can still be applied to our own [culture],” Becraft said. “They learn that people from around the world are all different, but also fundamentally the same.”

Both Roberts and Becraft were given a warm greeting later that evening, as children, parents and others in the community greeted them during the latest Kessler Cultural Evening reception at the depot downtown. The artists shared their experiences at the school with those in attendance, and talked with guests over hors d’oeuvres and tropical music playing in the background.

The two’s visit was organized through Spartanburg School District One’s Kessler Artists in Residence program, which brings in artists of different backgrounds into Landrum’s elementary and middle schools throughout the school year. The visits are made possible by the Mary F. Kessler Fund of The Polk County Community Foundation, which has funded the program for the past seven years.

Cindy Riddle, assistant superintendent of visual and performing arts with the school district, said the goal of the program is to expose children to different artists — from painters to creative writers — during the students’ formative years.

“We try to hit every discipline, at every grade level, by the time they leave school,” Riddle said.

Not only do the artists expose the students to the fine arts, but they also aim their lessons at enhancing the student’s existing skills in language, science, math and other subjects, Riddle said.

In conjunction with the school  visits, the district also organizes  the Cultural Evening receptions, which give local children and their families a chance to experience a fun evening of food, art and hobnobbing that one would typically only experience in a large metropolitan area, Riddle said.

Alyson Thornton, the gifted/talented teacher at O.P. Earle and one of the committee members who helps organize the artist visits, echoed Riddle’s comments, adding that she never had the chance to attend these kinds of receptions or work with these kinds of artists back when she was in elementary school.

“Some of these kids don’t regularly get to leave Spartanburg County, so it’s a really cool, really neat experience for them,” Thornton said.

The district will plan to bring in its next batch of visiting artists near the beginning of the 2018-19 school year, likely in August or September, she said.