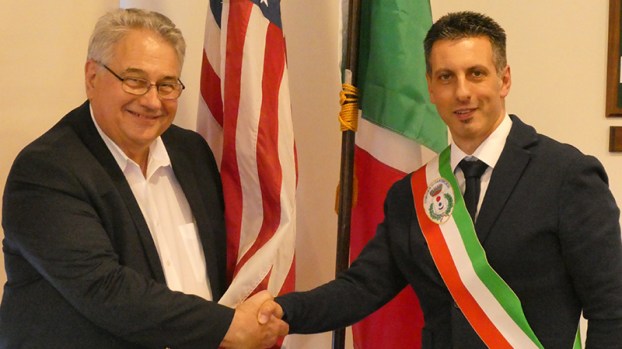 Mayor Gianfranco d’Isabella was an honored guest at an elegant dinner Friday night, March 23, at the Saluda Senior Center.

In his remarks, Mayor d’Isabella talked about the importance of family to Italians, and said that he had never seen a town with the depth of caring, support and connectedness that he had seen in his week in Saluda. He said he sees Saluda as an extended family, and that the welcome he received made him feel a part of that family.

Mayor of Carunchio, Italy, Saluda’s sister city, Mayor d’Isabella and his wife, Paola, and Cristina Criscio were treated to Saluda’s best during their visit the week of March 19.

On Tuesday night, more than 30 Saludians and friends attended a special called meeting of the Saluda City Commission, which adopted a resolution welcoming d’Isabella, extending friendship and outlining goals for the relationship.

Amid a flurry of commercial tours in Henderson and Polk counties, d’Isabella and his party took time out to visit many of the shops on Main Street. At the Saluda Historic Depot, they learned the history and importance of trains in Saluda’s history and received warm Depot sweatshirts.

The highlight for the mayor was his visit with Dr. Cari Maneen, principal of Saluda Elementary School.

They were joined by Polk County School Board member Rhonda Corley and Ronette Dill, director of curriculum and instruction, for a discussion of how the two schools could work together to benefit their students.  The third graders interviewed the mayor with each student asking a question about school and life in Carunchio for its elementary students. The Saluda fifth graders presented a video about a day in the life of a student there.

For more information about Saluda’s Sister City program, trips to Carunchio or to volunteer to be a part of Saluda Sister City, call Judy Thompson at 828-489-6578.

Asheville Christian fought back from a 4-0 deficit Monday, putting together two big rallies in the final innings to hand... read more