Adventures on Horseback: It’s not the destination, but the journey

There is a saying, “Be careful what you ask for.”

There’s also some saying about the Lord taking care of drunks and fools. Well, I don’t drink . .

In 2003, I made the mistake of asking Creator what I should do next. The answer? “Get on your horse, ride around the country and talk about world peace.” 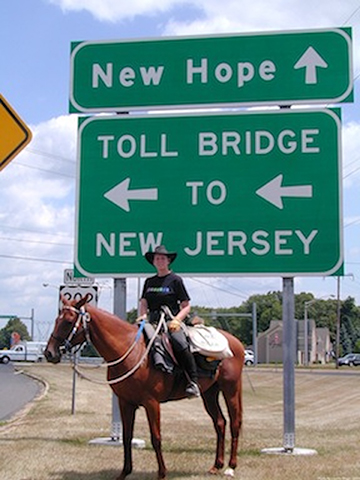 Catherine Hunter on her thoroughbred, Count of War, in New Jersey near the end of their 900-mile ride from Gowensville to Ground Zero in New York City. (Photo submitted by Catherine Hunter)

I’m no peace activist. I don’t know anything about this. What would I say? How would I eat? How would I take care of my horse? What if someone sticks a gun in my face?

Nine months later, I had sold or given away nearly everything I owned, mounted my thoroughbred, Count of War, and was leaving Gowensville, heading to Asheville. I had no idea how I was going to do this, where I would stay or how I would take care of Count, but the idea wouldn’t let me go.

It was 15 years ago this coming October when Count and I started that ride. We stayed the winter in Asheville and left for New York City the next April.

It was a wonderful, amazing, incredible, enlightening and very challenging experience. I hope I never have to do anything like that again.

I had lots of confidence in my horse, but I’d never been on a long ride. It was the early days of the internet, so Googling “how to pack a horse,” or “how to ride long distance,” wasn’t really possible. At least it wasn’t on my radar.

I thought, or at least hoped, that my years of experience in Civil War reenactments would help. After all, I knew how to tie a horse on a picket line and had some rough camping experience.

So, I bought some saddlebags, packed a spare pair of jeans, three shirts, some extra socks and underwear, put a second blanket under the saddle, rolled a tarp on the back, and off we went.

It was just the two of us for the next 900 or so miles. No trailer, no back-up vehicle, no one to bail us out if we failed.

I would never have made it without Count. I didn’t know we were going on a “peace ride” when I named him for his ancestors, Count Fleet and Man ‘O War. He was amazing. He never spooked at anything. I think the only thing he looked at the whole trip were the white painted lines on the road.

I remember a bridge we crossed in New Jersey. It was at least the length of a football field. I took Count on the walkway to avoid the cars rushing by on the other side of the 3-foot wall that separated the traffic from the pedestrians.

The walkway was about 6-feet wide and the open side was roped off with a wire cable. The floor was open metal through which you could see the river rushing by three stories below.

Bless his heart, Count put his head down and stepped onto the bridge, which clanged and bounced with every hoof beat. He never hesitated.

I learned life lessons on that trip. I learned about faith. Creator always provided what we needed.

There was the day in Morganton when I was sitting on the side of the road at 5 p.m., waiting for a phone call from the local newspaper reporter. I had nowhere to stay that night, and Count and I were both were tired and I, at least, was hungry. Throughout the trip, I made sure Count had plenty of grazing time everyday.

It wasn’t long before the reporter called, and Count had a comfortable stall and plenty of oats, and I was on my way to stay at the reporter’s house.

Other angels turned out to help all along the way. Whatever we needed, whenever we needed it, Creator sent the right person with a bottle of water, a few dollars or someone who bought me lunch or a message of hope.

Several times throughout the journey, Count and I were asked to speak to different groups about our message of world peace. I say Count and I, because he brought as much, or more, of the message through his presence as I could through words.

I learned about shutting my mouth and letting Creator speak through me. I’m still working hard to practice that skill today. It’s not always easy.

In New York City, I learned it is truly is not about the destination. It was about the journey, living daily with fear and faith, being alone for thought and meditation, and learning to receive.

Oh, I also learned why I prefer to live in a small town in North Carolina.

Catherine Hunter’s journalism career spans 20 years of writing for newspapers and magazines, including The Chronicle of the Horse, The Western Horseman, he Tryon Daily Bulletin and Foothills Magazine. In 2000, Hunter received a South Carolina Press Association award for reporting in depth. She is the author of “Sacred Connections Horsemanship: Empowering Horse and Rider through Chakra Energy.” Email her at catherine.hunter@tryondailybulletin.com.