The Art of the Horse returns 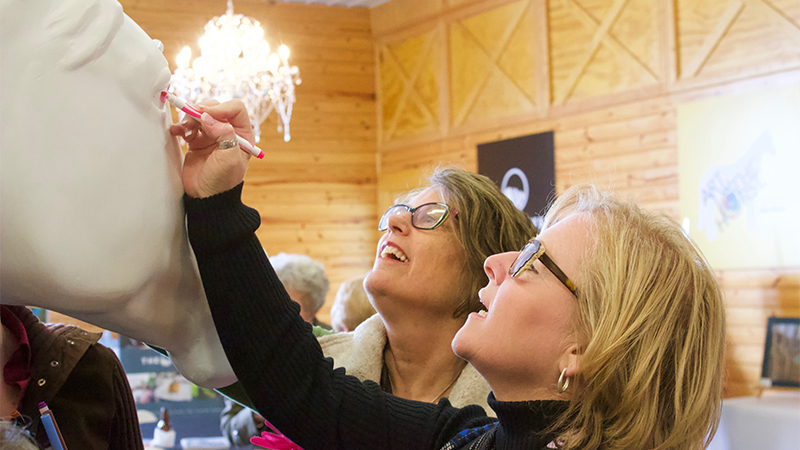 Local artists — both professional and amateur — had a chance to express themselves on a very unique canvas Saturday. Local nonprofit Our Carolina Foothills hosted a kick-off party for its second rendition of The Art of the Horse — with the theme of “One World, One Vision” — that afternoon, at a reception at the recently opened Caitlyn Farms event center in Mill Spring. During the event, guests were invited to help decorate a fiberglass horse, which is modeled after the ones that will be displayed throughout the Foothills area and beyond through October, to celebrate the upcoming World Equestrian Games. (Photo by Ted Yoakum)

MILL SPRING — Some new works of art will soon be galloping into Polk County, Landrum and the surrounding area.

Local nonprofit Our Carolina Foothills hosted a special kick-off party for its The Art of the Horse program Saturday at the new Caitlyn Farms event center in Mill Spring. During the event, the around 200 guests in attendance had a chance to meet the various artists who have contributed their skills to this year’s program, who have designed and painted more than 30 fiberglass horses, which will be on display throughout the Foothills area and beyond through early October.

This year’s Art of the Horse is an expansion of the first rendition of the program, which took place from April to September 2016. Artists created a total of 16 life-size fiberglass horses, in three thoroughbred stances — grazing, walking and standing — which were placed on public display in Landrum, Tryon, Columbus and Saluda.

To celebrate the World Equestrian Games coming to the Tryon International Equestrian Center in September, Our Carolina Foothills decided to bring back The Art of the Horse, while expanding the scope of the program.

From now through October, a total of 30 decorative horses will be on display in Landrum, Tryon, Columbus, Saluda and neighboring areas. In addition to the three stances showcased during the initial The Art of the Horse display, two new breeds — the quarter horse and the Arabian horse — will be added to the lineup this year.

In addition to the horse itself, each location featuring one of the art pieces will have information about the artist and a description of the animal. A map of the different spots people may find the pieces will be provided at different tourism, art and equestrian destinations in the area.

Among the artists lending her talents to the expanded art program is Tryon’s Lee Barker, who created two horses: one titled “Sun,” and the other titled “Moon.” As their names suggest, the two pieces stand in stark contrast to one another, with “Sun” featuring bright colors and painted cogs and gears that give it a mechanical feel, while “Moon” is more subdued, and features  mythical and fantastical decorations, Barker said.

Helping the local artist with the project was her daughter, Katie, who is currently in her last year studying at North Carolina State University, she said. The younger Barker has helped her mother rig the art pieces with some lighting technology which — without giving away too much — will make the pieces really stand out, they said.

Lee said that “Sun” will be featured soon in downtown Columbus, while “Moon” will be displayed at the Mill Spring farm.

“We are excited, very excited,” Lee said about the debut of her work. “They will make a beautiful sight, like a jewel, especially at night.”

This will mark the second time that Lee, the secretary of the Tryon Painters and Sculptors group, has lent her skills to The Art of the Horse. Her first piece, titled “Quilting Bea,” sold for $7,000 at auction in summer 2016.

For her, Art of the Horse is more than just a chance to share her love of painting and artwork with the community, but an opportunity to contribute something that can be enjoyed by everyone living in or stopping by the Foothills, Lee said.

“It’s a community project,” she said. “It’s fun to go out to different stops. It showcases parts of the county I rarely visit.”

“The region seems a whole lot larger when you’re trying to track down all the horses,” Katie added.