Jerry Daniel Blackwell, of Green Creek, North Carolina, a born-again Christian, went home to be with his Lord and Savior Jesus Christ, March 24, 2018, at the age of 77.

Jerry passed away at the Smith Phayer Hospice House in Landrum, South Carolina, after courageously fighting a lengthy battle with dementia.

He was born in Polk County, North Carolina, April 5, 1940. Jerry was the son of the late Floyd O. Blackwell and Celia Whiteside Blackwell, of Green Creek. 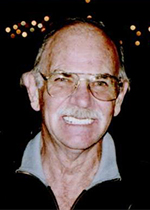 Jerry married Suzanne Moore from California, and they had two daughters. He is survived by his daughters, Dina Blackwell and Terri Blackwell Hoge (Justin), both of Oakland, California.

Jerry is also survived by one brother, David Blackwell and his wife Janice Blackwell of Green Creek; and three sisters, Betty Stanley of Green Creek, Brenda High of Bluffton, South Carolina, and Doris McEntire and her husband Choya McEntire of Green Creek.

He was preceded in death by a brother, William (Billy) Blackwell, and a sister, Sadie Blackwell, who died at birth.

Jerry was a veteran and was honorably discharged from the U.S. Air Force

A funeral will be held at McFarland Funeral Chapel, Tryon, North Carolina, on Wednesday March 28, 2018, at 2 p.m. Visitation will be from 1 to 1:45 p.m. at the funeral chapel. The funeral will be conducted by Don McIntyre, followed by a graveside service and burial at Green Creek First Baptist Church in Green Creek.

In lieu of flowers, memorials may be given to Green Creek First Baptist Church, 534 Coxe Road, Columbus, NC 28722 in Jerry’s memory.

An online guest register in available at www.mcfarlandfunerlchapel.com