Tryon triathlete going the distance in her sport 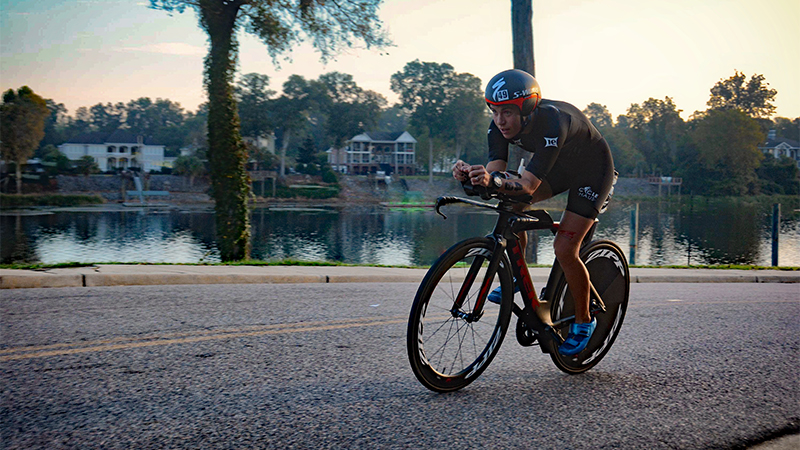 Doehla recently received USA Triathlon’s 2017 Rookie of the Year award. The woman, who made her debut as professional triathlete last year, was recognized for placing in the top three in four consecutive races. (Photo courtesy of FinisherPix)

Woman wins Rookie of the Year

TRYON — Tryon’s Alissa Doehla has never been the type of athlete who is content with merely coasting across the finish line.

As a teenager growing up in Indiana, Doehla was determined to join her school’s varsity soccer team, despite the fact she was still recuperating from an injury. While still wearing a back brace, she took up running in order to get in better shape for the season.

Turns out, she was a natural — prompting her to join both the soccer and cross country teams as a sophomore, in spite of both seasons taking place during the fall semester.

After graduating high school and college, Doehla became a professional runner, and racked up a list of accolades that would impress anyone who has ever laced up their sneakers and hit the pavement. These accomplishments include representing Team USA twice in 2011, on the bronze medal winning World XC team and on the World Marathon team. 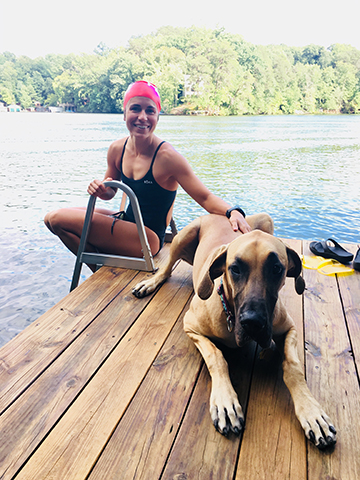 Tryon’s Alissa Doehla and her Great Dane, Frankie, pose for a photo at Lake Lanier, where the triathlete practices her swimming. (Photo courtesy of Kyle Doehla)

After dealing with several setbacks in her running career, however, in 2016, Doehla decided to make a change and challenge herself once again, tackling not just running, but swimming and cycling as well, in her first triathlon in Naples, Florida.

“I figured if I just survived, it would be a victory,” Doehla said about her expectations.

Turned out, she did more than survive — she thrived. Just like her transition to running years earlier, the athlete had found another sport where she shined, as she came back from a six-minute deficit to take home the first-place trophy.

Now, with a year of participating in triathletes as a pro under her belt, the Tryon athlete can add yet another achievement to her list: USA Triathlon’s 2017 Rookie of the Year.

The organization recently named Doehla as one of two winners of its Rookie of the Year award, along with Tony Smoragiewicz, of Rapid City, South Dakota. USA Triathlon recognized Doehla for her debut professional season last year, in which she placed in the top three in four consecutive races in the Ironman 70.3 series, organized by the World Triathlon Corporation.

“When I started my triathlon journey two years ago, I never anticipated winning this award,” Doehla said in a release announcing the award. “This will motivate me as I continue to strive for faster [results].”

For Doehla — who has called Tryon home for the past two years, moving from Asheville with her husband, Kyle — the recent award is one of the most important in her career as a professional athlete, she said.

The Indiana native has been involved in sports and athletics for as far back as she can remember. She began honing her skills as a swimmer from an early age, following her mother to the swimming pool to practice, she said.

After years of swimming and playing soccer, Doehla eventually settled on running as her primary athletic passion, after being convinced to join the cross country team by her Club Soccer coach at the time, she said.

“I feel like [running] is a pretty fair sport, where, if you put in the time and effort, you will get faster,” Doehla said. “I found if I ran the same the loop every day, I would get faster and faster at completing it. That was really appealing to me.”

She continued to develop her skills as a runner in college, attending two years at Michigan State University before finishing her studies at Indiana Institute of Technology back in Fort Wayne, Indiana.

After college, she attended the Zapp Fitness Olympic Development Center in Blowing Rock, North Carolina, in order to train and push her skills in distance running to the next level. She narrowly missed the cut to compete in the 2012 Olympic games, placing eighth in tryouts.

After spending six years running professionally, Doehla switched to competing in triathlons, as she already had experience in two of the three sports, and the races were something she had long been interested in trying, she said. After spending a year competing as an amateur, Doehla went pro in 2017, and participated in races throughout the U.S., as well as one in Mexico, she said.

Making the transition from runner to triathlete was not easy by any means — she spends upwards of five hours a day practicing the different disciplines, including making long bike rides up the mountains in the Foothills area, and swimming in the waters of Lake Lanier. In spite of the often grueling schedule, the change has breathed new life into her career, Doehla said.

“It’s pushed me outside my comfort zone,” she said. “I’m a person who naturally sticks with what I know. Having to try new things has been really good for me.”

Doehla thanked her husband for helping her get to this point in her career, as Kyle serves as her bike mechanic, travel agent and a general “jack of all trades, who does it all with a smile,” she said.

Right now, Doehla is just getting back into her training, as she has spent the last several weeks recovering from an injury. She wants to begin competing again this year, hopefully in time for the 2018 Ironman 70.3 World Championship, which takes in September at Nelson Mandela Bay in South Africa.

Just like with running, Doehla believes anyone who is willing to put the time and effort into practicing for a triathlon can get something out of the sport, even as an amateur, she said.

“It’s really fun to challenge yourself,” she said.