Southern Living received 32,000 responses to its poll about small towns, and listed Landrum  along with other towns, such as Aiken, which was in first place; Beaufort, which was in sixth place; and St. Augustine, Florida, which was listed as 10th. 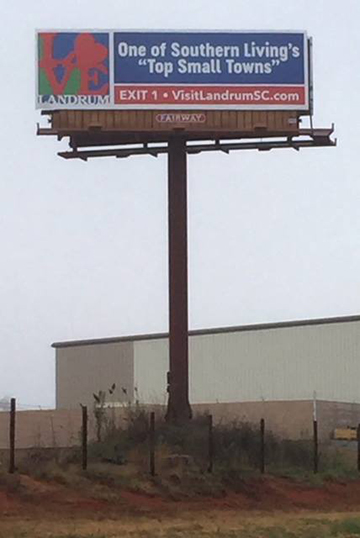 The updated billboard heading north towards Landrum on I-26 lets travelers know Landrum is on the list as one of Southern Living’s best small Southern towns. (Photo courtesy of Our Carolina Foothills)

The article mentioned Landrum’s antique shops and brick storefronts. It also said, “. . . a restored train depot gives a sense of the town’s past.”

Of course, the horse farms made the article as well, inspiring tourists to, “. . . take a drive through South Carolina’s horse country, cruising through pastures hemmed by white farm fences. . .”

The article even mentioned the Hare and Hound as a good place to “refuel.”

The city of Landrum and Our Carolina Foothills are taking advantage of the listing, and posting on it the updated billboards on I-26. They have updated the northbound sign between Campobello and Landrum, and plan to update the southbound sign between Saluda and Hendersonville before the summer season.

I’m Just Saying: When that one song you cannot…