Reassembling to continue the fight against addiction 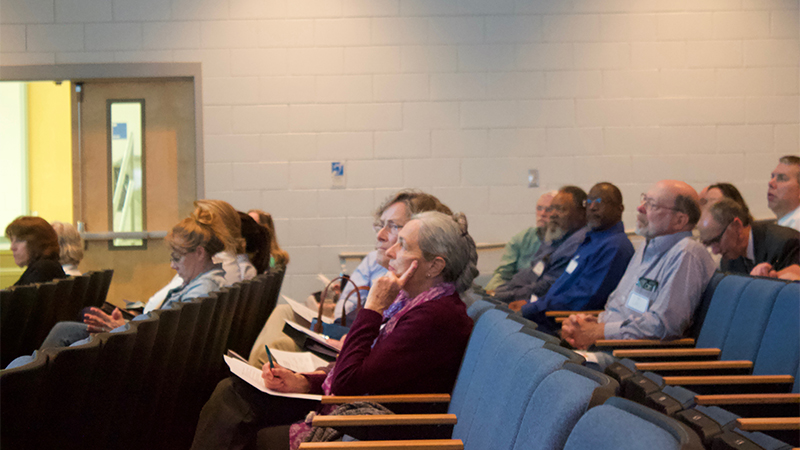 Attendees of Tuesday’s opioid and substance abuse forum listen to the presentations inside the Polk County Middle School Auditorium. (Photo by Ted Yoakum)

MILL SPRING — Last fall, members of the Polk County community came together to identify the opioid and substance abuse problems that continue to grip the area.

On Tuesday, these same concerned citizens — joined by plenty of new faces — reassembled to discuss how to join forces to combat the problem, and to help pull those struggling to stay afloat against the rapids of addiction out of the water.

A packed house attended the second Polk County opioid and substance abuse forum, which took place that evening at Polk County Middle School. Attendees — who hailed from local government agencies, medical and mental health treatment centers, the school district and other segments of the community — listened to several presentations on some of the resources that exist to help local residents battle substance abuse issues, as well as broke into small groups to propose ways they could work together to make a positive difference.

Among the speakers Tuesday was Matt Gannon with Vaya Health, a managed care organization for 23 counties, including Polk. Gannon’s presentation focused on addressing one of the questions raised during the first Polk County forum on substance abuse, hosted in October — “what is addiction?”

Borrowing the definition from the National Institute of Drug Abuse, Gannon described addiction as a “chronic relapsing brain disease, that is characterized by compulsive drug seeking and abuse, despite harmful consequences.”

As for why people dealing with drug addiction continue to pursue their habits — in spite of repeat incarceration or health problems — has to do with how drug use affects users’ brains. Drugs provide a surge of dopamine — the chemical that provides humans with pleasurable feelings for performing actions that sustain their lives — that is 10 times the amount a person receives for other, less harmful activities, Gannon said.

This effectively hijacks the drug user’s mind, causing them to continue seeking and abusing drugs, no matter how irrational their behavior may seem to others.

“[Drug abuse] replaces food, it replaces time with our family — the basic tenets of life that keep us together as families and as human beings,” he said.

With the rise in prescriptions of opioid pain killers over the years, more and more people have fallen victim to drug  abuse, leading to the current crisis that grips the country — in particular North Carolina, which has been one of the states most impacted by the drug crisis, Gannon said. While Polk County is doing slightly better in terms of the opioid crisis — for example, there is only an average of 70 pills per resident locally, compared to the average of 78 throughout the rest of the state — the problem is getting worse, not better, Gannon said.

“We might have some Band-Aids for the issue, like Narcan [which can reverse an opioid overdose], but Narcan is not the answer,” Gannon said. “You can’t have Narcan in infinite supply. We have to work together as a community to support those suffering from this illness and their families.”

Attendees of the forum offered several ways to fight substance abuse in Polk County, including starting a “Lock Your Meds” campaign to encourage residents to protect their prescription pain killers from abuse; more counseling for locals dealing with substance abuse issues, particularly those under 18; and forming a support organization to help those who have recently completed drug rehabilitation.

Reiterating the same message he has shared since the first forum last fall, Joshua Kennedy, director of the Polk County Consolidated Human Services Agency and one of the main organizers of the forums, emphasized that the county’s diverse number of agencies, health care providers and residents should continue coordinating to help bring the addiction menace to heel, once and for all.

“No one provider, nor agency, nor government agency, is going to resolve this by themselves,” Kennedy said. “It will take every single one of us out there working together. No bystanders.”