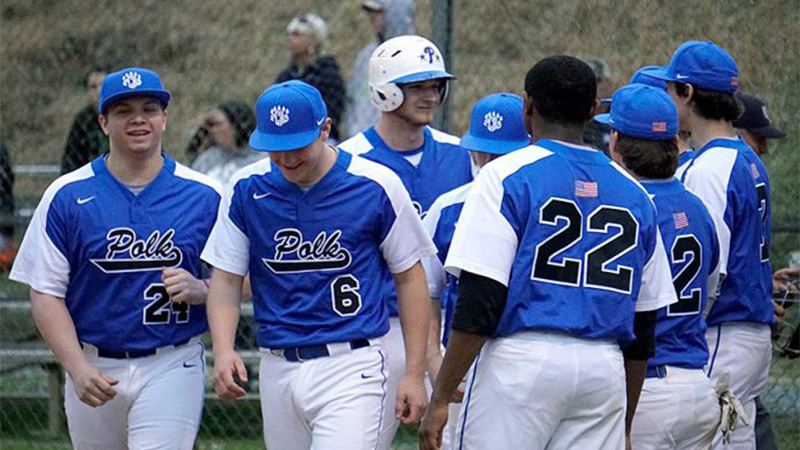 Tyler Harris and Holden Owens each homered as the Wolverines rallied from a 3-1 deficit to hand Rosman a 9-3 setback in a nonconference clash in The Bottoms at PCHS.

Polk County improved to 7-1 with the win, its sixth straight. The Wolverines have not been 7-1 since the 2011 season.

Polk County’s bats needed a jolt, as Rosman starter Parker Mullen held the Wolverines hitless through the first four innings. Polk scratched out a 1-0 lead in the third as Clark Phipps reached on an error, moved to second on a Kyler Scruggs sacrifice, took third on an Avery Edwards sacrifice fly and then scored on a passed ball.

Polk County starter Scruggs kept Rosman (4-2) off the scoreboard until the fifth, when the Tigers fashioned a three-run rally against the tiring junior. Scruggs scattered six hits in four and 2/3 innings, striking out two.

On in relief, Austin Geagley worked out of a bases-loaded situation to keep the Rosman lead at 3-1.

It did not stay there long.

Harris opened the fifth with his first homer of the season, a drive off a 2-2 pitch to left-center. Phipps then scorched a grounder just inside first base and into the corner in right. As Phipps raced to third, Rosman let the throw from the outfield get loose, and Phipps sped on home to even the game at 3-3.

With one out in the bottom of the sixth, Evan Rimer drew a walk, stole second and then moved to third on an errant throw. Rimer could have walked home from anywhere, though, as Owens hammered a 2-2 pitch over the Polk County batting cage behind the left-field fence.

Sedric Pickett followed with a double and Harris singled to put pinch runner Wilson Edwards at third and pinch runner Jordan Bishop at first. Bishop stole second, with the throw going into the outfield to allow Edwards to score and Bishop to move to third.

Nick Capozzi then perfectly executed a suicide squeeze, with Bishop scoring and Capozzi reaching base. After a walk to Phipps and with two outs, Avery Edwards blooped a fly ball into shallow left that allowed both runners to score to make it 9-3.

“Holden’s homer, I think it had a stewardess on it,” Alm said. “With the speed we’ve got and the base-running smarts we have, we can put a lot of pressure on the opposing team on the bases. That forces them into making some mistakes.

“The long balls [have] been helping us, too.”

Geagley pitched two and 1/3 innings of relief to earn the win, striking out three and allowing three hits.

“Kyler Scruggs did a phenomenal job,” Alm said. “He got tired at the end, but that was just his first start.

Harris finished 2-for-3 with an RBI to lead the Wolverines, who traveled Tuesday to Owen for a Western Highlands Conference matchup.