Fred Herres, a woodworker who works out of his Tryon studio, has been named the Tryon Arts and Crafts School’s Artist of the Month.

His woodworking creations may be seen during the month of March in the gallery of Tryon Arts & Crafts School at 373 Harmon Field Road. Hours are Monday through Friday from 9 a.m. to 5 p.m., and Saturdays from 9 a.m. to 1 p.m. 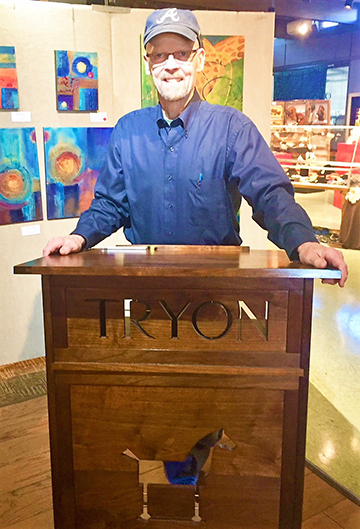 As you enter the gallery, you will also see the lectern that Fred created for TACS.

Fred’s lifelong love of woodworking started in 1974, when he was stationed at Davis military base. At the urging of his wife, he decided to make a coffee table at the craft shop on the base, and drew plans and made one there.

Fred is a graduate of University of Missouri Kansas City, with a master’s degree in public administration. After college, he served on active duty as an infantry officer in the U.S. Army for 29 years, retiring as a colonel in 1998.

Following his retirement from the Army, he worked for the True Value Company, a hardware distribution company, as an area human resources manager for 14 years, retiring in December 2013.

After his retirement, Fred continued to pursue his love of woodworking. With a focus on furniture making, he attended a 12-week furniture intensive course at the Center for Furniture Craftsmanship in Rockport, Maine, from February to May 2014.

“I have a love of both furniture and design, and it’s important to me to make something that’s useful,” he said about what inspires him about his craft. “I like basic, non-decorative but functional furniture, such as Shaker, Stickley, Limbert, etc.”

Fred is a current board member of TACS, with his work featured in several of TACS’ shows. He has been a featured artisan in the gift shop.

He has both taught woodworking workshops at TACS, as well as enjoyed taking them along with numerous bladesmithing classes at the forge.

A day everyone can celebrate