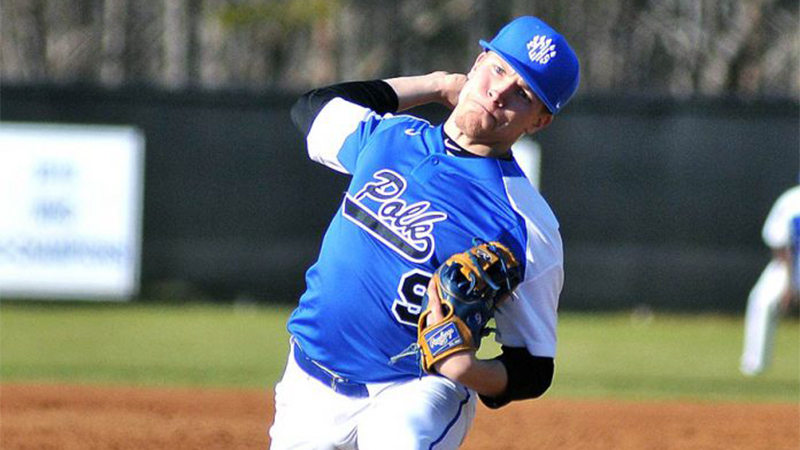 Polk County’s offense needed a couple of innings to warm up Tuesday on a chilly day in The Bottoms at PCHS.

Avery Edwards did not.

Edwards allowed a single to the game’s first batter, Derek Thomas, then struck out nine while throwing five hitless innings. Mountain Heritage’s only base runners in that span came on a pair of walks and an error; one of those walks helped lead to the Cougars’ first run and cut Polk County’s advantage to 3-1 entering the bottom of the fourth.

Clark Phipps singled and Kyler Scruggs was hit by a pitch to open the Wolverines’ half of the inning. A Mountain Heritage (0-1, 0-1) error on Elijah Sutton’s grounder allowed Phipps and Scruggs to score to make it 5-1. Evan Rimer followed with a double before Owens slammed his second homer of the season, clearing the left-field fence to make it 7-1.

Kaleb Kropp singled and scored on Sedric Pickett’s double and Nick Capozzi then doubled in Pickett to give Polk a 9-1 edge.

“Avery came out and threw strikes and did what we asked of him,” said Polk County head coach Billy Alm. “Obviously, the home run by Holden was a game changer. We had three or four hits after that, boom, boom, boom.”

Polk County (5-1, 4-0), off to the program’s best start since the 2011 squad raced to a 7-1 record, added a run in the fifth on an Owens single and another in the sixth on a bases-loaded walk to Rimer.

The Wolverines broke a scoreless tie with three runs in the third inning, loading the bases on a hit batter and singles by Sutton and Rimer. A Mountain Heritage error, an Owens sacrifice fly and a Kropp RBI double gave Polk its 3-0 lead.

“We’re coming out and working hard every day,” Alm said. “Their work ethic is second to none. Putting it together early is key, but we want to be peaking by the end of the season.”

Kropp finished 3-for-4 to lead Polk’s offense, with Owens going 2-for-4 with four RBIs. Rimer and Pickett each had two hits and Sutton, Wilson Edwards, Nick Capozzi and Phipps each finished with a hit.

Austin Geagley pitched the final two innings for Polk County, which will travel to Madison on Friday.