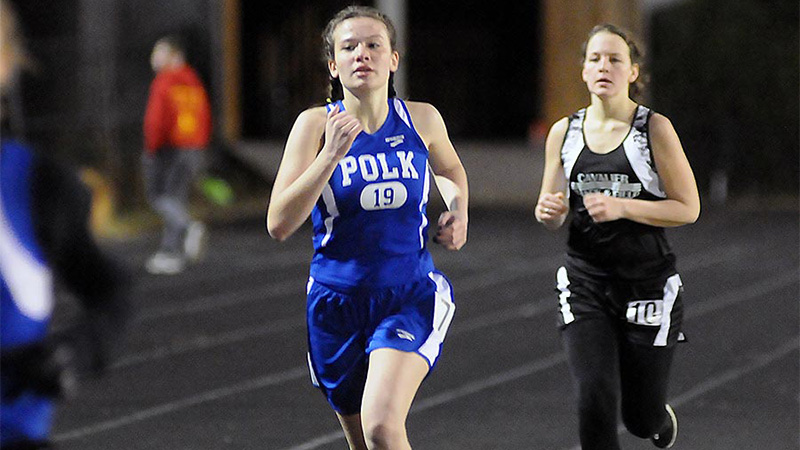 Polk County amassed 150 points to finish atop the 10-team field. North Henderson (134.5), Hendersonville (106) and R-S Central (54) were the next three finishers on a cool evening.

The Polk County girls placed third in the 12-team competition, with Hendersonville and Brevard taking the top two spots.

It proved a good night for both teams in terms of qualifiers for the 1A West Regional, with both teams having several athletes reach the standard for the regional meet.

For the Polk girls, Reagan Waddell won the shot put with a qualifying throw of 35-0 1/2. Waddell also took second place in the discus.

Izzy Jackson won the 400 meters in 1:03.33, with teammate Mariah Overholt also posting a qualifying time of 1:04.57 while placing third. Overholt also qualified in the long jump, finishing second at 16-4 3/4, with freshman Marissa Twitty also earning a regional berth with a fourth-place effort of 15-4 1/2.

Lauren Ketwitz placed second in the pole vault with a qualifying jump of 9-6 while the Wolverines’ 4×400-meter relay team qualified with a winning time of 4:31.44.

For the Polk boys, junior standout Jake Justice qualified in two events, winning the 400 meters in 52.5 while taking second in the long jump with a mark of 20-7. Justice did not compete in the pole vault, where he is the reigning indoor state champion.

Other standout performances included Luke Sellers’ win in the discus, with a throw of 113-9 1/2, and third-place finish in the shot put, Jason Fox’s win in the triple jump (37-1), Gaige Lewis’ win in the high jump (5-2) and Dillon Overholt’s fourth and third-place efforts in the long jump and 100-meter dash.

The Polk 4×400-meter relay team also won its race in a time of 3:41.28, edging Hendersonville by seven hundredths of a second in the final event of the evening.

Polk Middle offense swings to life in loss to…