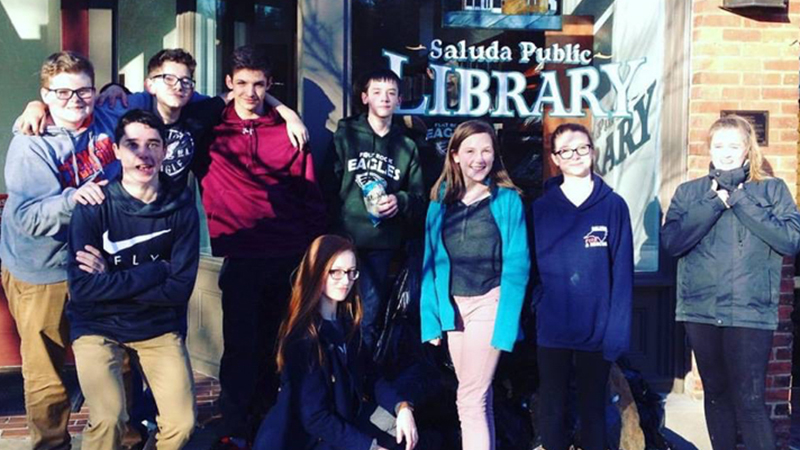 SALUDA—Polk County Commissioners said this week that the new Teen Center at the Saluda Library is helping the afterschool dilemma for older students.

Commissioners met Monday and heard from Polk County Library Director Rashira Finsel on how the new teen space came about.

Finsel said there is a very active teen group in Saluda, who get off the bus every day and gathers at the library. She said there are between 10 to 25 students who assemble there after school.

Finsel said the students were asked on a survey what programs they wanted.  Along with being service minded and wanting to do things like clean up the park, they overwhelmingly wanted a teen room.

“We took this seriously because teens deserve to be taken seriously,” Finsel said. “We see them as important, contributing members of our society.”

The students were in luck as the Saluda Library is three stories, and the bottom floor was empty, Finsel said. She said the students were involved in the planning and decision making for the space. They wanted more of a coffee shop vibe than a kid’s one, she said.

“The City of Saluda, which owns the building, provided the manual labor,” Finsel said. “Jon Cannon, Saluda city manager, was part of the steering committee.”

Funding for the teen room came from a grant from the Polk County Community Foundation and a bequest, with $7,000 from PCCF and the remainder from the bequest. Finsel estimates the teen room was accomplished for about $16,000.

The teen room includes a chalkboard wall, where students have written their own rules for the room, a couple of gaming systems, computers, a large screen television and young adult literature.

“We look forward to the space evolving and changing with the youth,” Finsel said.

Finsel said they would like a similar space at the main Columbus library.

Commissioner Vice Chair Myron Yoder said the county often has suggestions for these type things for young people, but not many people to facilitate them and find the funding.

Commissioner Shane Bradley, of Saluda, said his son is one of those teenagers at the library, and he loves being there.

Commissioner Ray Gasperson said the teen room is really filling a need in Saluda, and he hopes the library can do the same in Columbus.

Gasperson said what the library is doing there is huge, saying it is solving some of the county’s afterschool issues.

Commissioner chair Jake Johnson, also of Saluda, said he appreciates everything the library did and the space was in desperate need of remodeling. He also said county officials have racked their brains on figuring out after school solutions, and this is a solution for teens.