Building bridges for the equestrian center 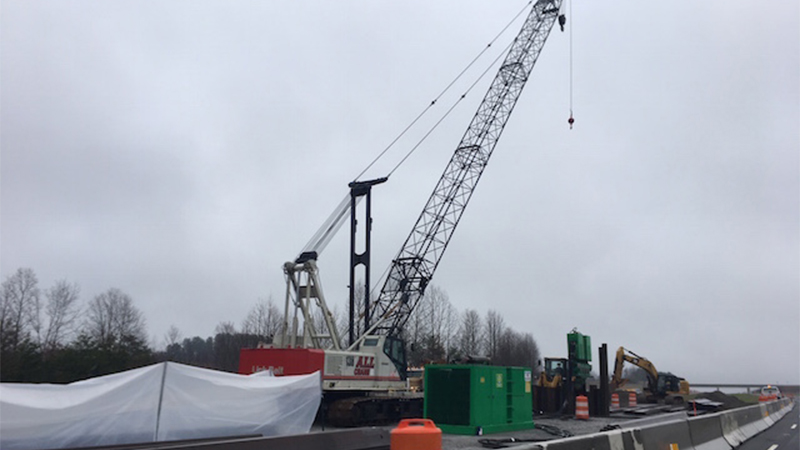 Construction has begun on U.S. 74 to create bridges to allow for TIEC to construct a road underneath the bridges to connect the parking area on Pea Ridge Road to another on John Shehan Road. The North Carolina Department of Transportation is building the bridges for an estimated $5.7 million, with construction scheduled to be complete before the World Equestrian Games in September. (Photo submitted by NCDOT)

PEA RIDGE — Construction is currently under way on U.S. 74 near the Pea Ridge Road exit, to create bridges so a road can be built underneath.

The North Carolina Department of Transportation said construction will include building bridges on each side of U.S. 74.

The Tryon International Equestrian Center plans to construct a road that will go under the highway from the parking area on Pea Ridge Road to John Shehan Road.

The road will be built so buses can traverse the area and not cause traffic problems along U.S. 74.

NCDOT officials said construction should be complete late this summer, in time for the World Equestrian Games, which is scheduled for mid-September at TIEC.

“The games are expected to attract more than 500,000 people from around the world, and will be staffed by residents across western North Carolina,” stated a press release about the construction from NCDOT.

Decker said originally the road was going to be a tunnel under U.S. 74, but now the plans are for the connector to be a road.

NCDOT said Vecilio & Grogran is the contractor on the bridge construction, which the NCDOT bid for $5.7 million.

During construction of the bridges, traffic will be shifted temporarily into single lanes in the current median, according to the NCDOT.

Later in construction, the U.S. 74 westbound on-ramp from Pea Ridge Road will be closed, according to the NCDOT, with a marked detour directing traffic east on U.S. 74 to Union Road, under U.S. 74, then to the westbound on-ramp.

“Drivers should slow down in work zones, obey all posted signs and watch for workers,” NCDOT officials said.