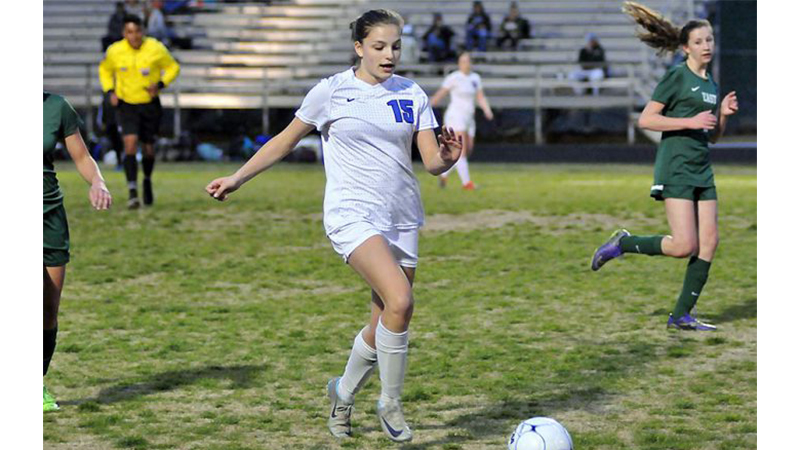 Polk County freshman Belen Akers races to gain possession of a free ball during the first half of Monday’s match. (Photo submitted by PolkSports.com)

Polk County opened its girls soccer season on Monday with new faces in goal and in the defensive back – and made it look as if they’d been there for a while.

Polk County made its home and season opener a successful one as Willow Arkell and Sara Muse each played a half in goal, both turning aside Eagle threats to preserve the win.

The Wolverines (1-0) narrowly missed a goal in the opening minutes as a Belen Akers blast from the left side hit the crossbar, with Jen Guerrero’s follow shot just wide right of the net.

But Polk County finally got the break it needed with 6:46 remaining in the first half as Kendall Hall launched a shot from the right wing, some 25 yards out, the blast bending into the top of the net for what proved to be the only score of the evening.

East Henderson forced Arkell to make a diving save with 2:33 left in the first half, but both Arkell and Muse had fairly easy nights as Polk County’s defense largely kept the Eagles from mounting a serious charge.

Polk County is scheduled to next be in action on Friday, traveling to East Lincoln for a 7 p.m. varsity start. The Polk County junior varsity is slated to make its debut on Wednesday at Asheville.