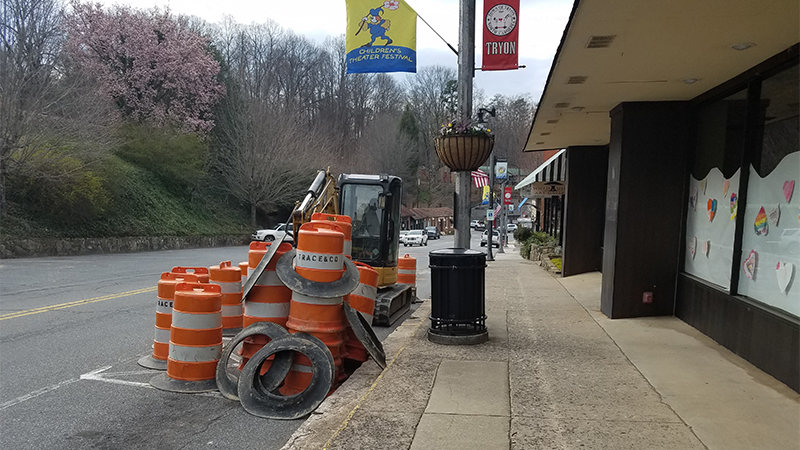 The Town of Tryon is finishing its Streetscape plan with a new sidewalk between the St. Luke’s Plaza and Palmer Street. Construction began this week on the new sidewalk. (Photo by Leah Justice)

TRYON — It has been almost 20 years in the making, but the last piece of downtown Tryon’s Streetscape plan has begun construction.

Trace & Company is beginning to replace the sidewalk between the St. Luke’s Plaza and Palmer Street downtown.

Construction began this week, with Trace estimating the construction will take about eight weeks, weather permitting.

Tryon Town Manager Zach Ollis said the design will be the same as the rest of the Streetscape project downtown.

Ollis said the only difference in this sidewalk project than the rest of downtown is the step in front of the block onto the street will be taken down to a traditional curb.

“This is possible due to the assistance from [the North Carolina Department of Transportation], who will help bring the road up,” Ollis said.

Ollis also said, as Trace did during last year’s sidewalk project, the company will communicate and work with business owners to allow access to the shops, and work around various schedules of downtown businesses.

The town estimates the new sidewalk with brick will cost approximately $85,000.