He is survived by his parents, Clyde E. Smith Sr. and Jean Smith; his wife, Linda; two sons, Clyde Ervin Smith III “Trae,” and Brian Smith and his wife Jessica; four grandchildren, Peyton, CJ, Colin and Coen Smith; one brother, Mike Smith and his wife Arlene of Rutherfordton; two Sisters, Sandra Norris and her husband David of Forest City, and Lisa Moir and husband Ron of Morganton. He is survived by numerous nephews, nieces and cousins. 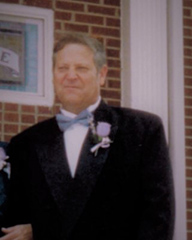 He was preceded in death by a sister, Gail Smith Bumgarner.

He was a Christian and was loved by all who knew him.

He was active in many sports, having set a state record in pole vaulting while in high school.  He began working as an athletic director in Rutherford County.

He later became town manager of Columbus for seven years, and then was town manager of Landrum, South Carolina. From there, he became manager of Cleveland County Water District and served there for 18 years from 1996 retiring in 2014.

Butch had many talents and one was being able to bring a town/business from a debt to having surplus and has done so with minimal tax increase. Butch was appointed by the North Carolina General Assembly to serve on the North Carolina Department Environment and Natural Resources in 2013, and served until his passing.

Butch was also honored by having a reservoir named after him, the Clyde E. “Butch” Smith off-stream holding reservoir at the Cleveland county water plant.

Butch could relate to anyone: he could discuss budget constraints and bonds with commission members, how best to grow potatoes and greens, and any other of a thousand subjects. In his own words, he was “an educated redneck.”

He was well respected by colleagues, and gained a reputation for being efficient and tough. Despite his tough exterior and sometimes cutting humor, his ultimate effect in life was to bring people together.

If Butch wasn’t working, he was most likely spending time with family and friends at his farm in Polk County. His land was frequently abuzz with the sound of kids playing and adults talking as Butch grilled.

He led a full life, constantly surrounded by people who were happy to be in the presence of such an interesting and funny individual. More so than any accolade, most will remember Butch for the way he made people feel at home. He told jokes, he fed all who came to his property and he made his own way in life.

His life and impact will be felt for generations to come. His deeds carved a foundation upon which his descendants could flourish.

Online condolences may be made at www.crowemortuary.com. Crowe’s Mortuary is assisting the family of Butch Smith.

Italians are visiting Saluda in March